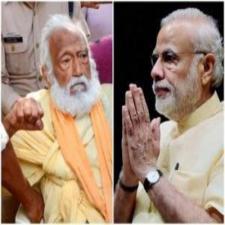 We all need to go beyond the death of fasting Swami Sanand (October 11, 2018) and the disappointment he carried to his pyre at Prime Minister Narendra Modi’s indifference to his demands for  “Aviral Ganga.”

His no longer can be treated as an unfortunate incident for it throws up a whole lot of disturbing questions about the present ruling dispensation, unethical Congress, the clique of Sadhus and even Shankracharya, and above all an ecological disaster which awaits at least 40 million Indians if Maa Ganga goes.

If you cared to look on Youtube, you would be startled by the lucidity and conviction of the great man, how logical and disappointed he sounded on Prime Ministers, ministers, high bureaucrats, media and his own fraternity of sanyasis and sadhus, how instructional he is to individuals like you and me about trusting no one but yourself in achieving a higher cultural and ecological goal.

Those who hold the Hindu heritage and its revival as their life’s mission; that PM Narendra Modi is the harbinger of that change, would be sorely wounded hearing the great devotee say “there can be no bigger conspiracy than Namami Gange”1 and that over Rs 20,000 crores spent on the holy river since 1986–and hundreds and thousands of crores more in pipeline–has been such a terrible, colossal waste.

He makes you shudder to the bones when he asks how the holy water, considered essential for a dying Hindu in every household, whose ashes if submerged in the holy river could pave the way for “nirvana”, which makes 10-12 crore devotees gather in faith in a Kumbh Mela; whose bacterial properties are lauded in 11 of 18 Puranas; which Krishna mentions in Bhagwad Gita as a dual image of his own, whose water once remained pure in jars even after decades, is hugely disease-prone today.

His stark questions to Uttarakhand government that it promotes and earns millions in the name of holy tourism in Haridwar and Rishikesh; makes visits of “kanwarias” as a moment to whip up the holy sentiments; and yet makes no attempt to stop hundreds of “barsati naaluhs” (rain-fed drains) from throwing its waste into the holy river; the debris of construction which further pollutes the river; the unbridled sand-mining, is a reflection of willful corrupt hypocrisy of the state.

To the Central government, he outlines the wrong methodology of measuring the contaminated Ganga water; the hundreds of dams which are under construction/planned, usurping of Ganga’s lands, the obfuscation between a judicial order and the real situation on ground. All of it made him undertake multiple fasts since 2008 when he forsake his identity of G.D. Agarwal, a graduate from Berkley University, an IIT-professor; an original member-secretary of the Central Pollution Control Board, and took to “sanyas” all with the sole purpose of devoting the rest of his life to the service of the mighty river he always addressed as Gangaji or Maa Ganga (“Like all women are not your mother; all rivers are not Gangaji”, is one of his famous euphemism).

He believed implicitly in the vow of PM Narendra Modi on the banks of river Ganga in Varanasi as his “mother” but then over a period of four-and-a-half years saw the uselessness of “Namami Gange”, the same bureaucratic apathy and the same litany of false promises. His first two letters to Modi during his final and fatal fast were initially addressed as “my younger brother” before his final letter took a formal tone. None of them elicited a response.

Politicians cutting across party lines are shown in poor light in various audios and videos which are listed at the end of this article and which are source of all the facts in this article. MatraSadan, where he lived and fasted in Haridwar, issued a transcript of Swami Sanand’s conversation with Union Minister Nitin Gadkari, incharge of the Ganga Rejuvenation project, which shows a rather disdainful minister.

Swami Sanand’s interview with Madhu Purnima Kishwar mentions how then Union Minister Jairam Ramesh once refused to scuttle a project since Rs. 500 crores had been spent on it. “If money is the issue, we would raise Rs 500 crores for you,” retorted Swami Sanand. “And our commission?” said Ramesh, rather jestily. “We would arrange it too,” sniped back Swami Sanand.

Swami Sanand’s views are readily available on YouTube on how he was forcibly admitted in AIIMS; how visitors couldn’t reach him in hospital even in visitors’ hours unless they were screened; how his faith in fellow sadhus and sanyasis—“all sadhus are dhongis, maukhata lagaye huan hain “(all Sadhus are hypocrites and two-faced)”—and even in his own Guru and Shankracharya—“how my private emails to government were instantly made available to them and how I was subsequently rebuked by them”—was completely eroded by the end of his legendary life. Not to mention environmentalist Sunita Narain who he found making excuses for her absence to Ganga’s cause.

And what this fuss was all about?

Because Swami Sanand scientifically knew more about Gangaji than ordinary folks in this country do. The holy river which begins in Gangotri glacier in Himalayas’s southern slope and runs through India and Bangladesh, a total distance of 2520 kms, home to 140 different species of fish and 90 species of amphibians, many of them now extinct, is the mother which nurtured India’s civilization for tens of thousands of years. It created the arable lands, lush forests, supported life which allowed the cultural, intellectual and religious magnificence of this country to flourish and endure.

The sediment-rich flow of Ganga and Brahmaputra is the largest known river delta in the world, spanning 59,000 square kilometers, supporting the livelihood of 400 million people. Vedas heavily mention Ganga as a sacred river.

It’s just not water alone—though it’s important enough for who survives without water?—but its’ unique properties. DS Bhargava of University of Roorkee found Ganga to decompose organic waste at a 15-25 rates faster than any other river of the world.

New Delhi’s Malaria Research Center claimed that water taken from Gange’s upper ambit prevented mosquito breeding. British bacteriologist Ernest Hanbury Hankin found out in 1896 that Vibrio Cholerae, a deadly bacterium known to spread Cholera, was killed within three hours after it was added in water from Ganga. He eventually concluded that Ganga—and Yamuna—have been largely responsible for preventing the spread of cholera.

Swami Sanand’s death to Gangaji’s cause was not the first one. Swami Nigmananda had died for a similar cause, seven years ago in 2011.  Swami Sanand’s had famously predicted that Swami Nigmananda’s death would make 10 Nigmananda’s sacrifice their lives. He himself was to be the next in line. The people we choose to effect the change, however, remain indifferent. Ganga remains a dump of our waste. Nothing but a mass resistance would do if Ganga, or India, is to survive.