Tejashwi wants to be CM: He ought to worry about his seat first 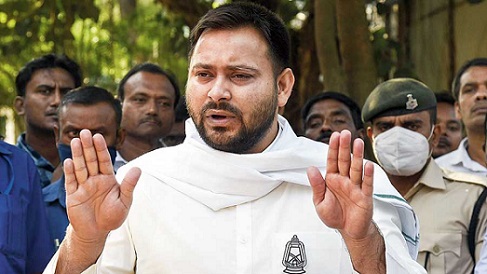 Tejashwi Yadav dreams of becoming the chief minister of Bihar. Lalu Yadav’s son and presently the face of his party RJD, Tejashwi ought to worry about winning his own seat first.

Tejashwi would contest from Raghopur and is pitted against an experienced BJP leader Satish Kumar, going past whom won’t be easy.

One can’t fault Tejashwi to have opted for this seat. It’s  Yadav-dominated constituency. His father Lalu Yadav won it in 1995, 2000 and his mother Rabri Devi in 2005.

However, Satish Kumar prevailed in 2010, having beaten Rabri Devi and was termed a giant killer. Though Tejashwi wrested it back in 2015, Satish Kumar lost only because he was a nominee under the RJD-JDU-Congress alliance.

But equations have changed since then as Janata Dal-United has found its way back to BJP.

Tejashwi, who once went on to become the Deputy Chief Minister to Nitish Kumar, whom he would call “chacha” then, is challenging his “chacha” now for the CM’s post.

The RJD has projected 31-year-old Tejashwi as the chief ministerial candidate but from being a CM candidate to actually becoming one depends on whether Tejashwi could save his seat.

While Satish Kumar can be seen addressing the gathering daily in the constituency, Tejashwi has addressed once on October 14 and another on October 29 only.

Chirag Paswan’s Lok Janshakti Party (LJP) has added much spice to the elections by placing Rakesh Roshan as their candidate from the Raghopur assembly. Roshan is also active but doesn’t seem to have as much significant presence as Satish Kumar, who is contesting the seat for the third consecutive time.

When asked about Tejashwi, Satish Kumar said that Tejashwi has lost the trust of people and has cheated them over the past five years. “Though he (Tejashwi) is trying to woo Yadav voters by claiming that he is going to become the chief minister after the elections, people are not interested,” Satish claimed.

Talking about LJP’s candidate Satish said, “Had Ramvilas Paswan been alive, this would not have happened. But the LJP candidate is nowhere in the race as even the Paswan voters are not backing him.”

Union Minister of State for Home, Nityanand Rai also has a great influence over Yadavs in Bihar, making it an added advantage for the BJP party.