Thank god China is only protesting against Taiwan in India; In Fiji they take matters into hands 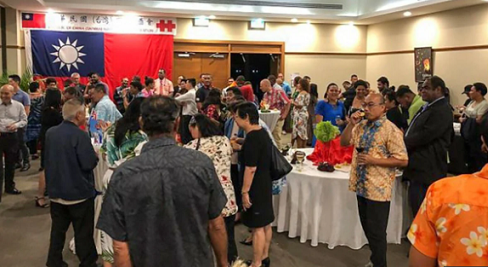 Indian media ought to be grateful that their response to Taiwan’s National Day early this month was only met by pre-emptive warnings and angry retorts by the Chinese officials including their ambassador to India. In a far remote Suva, capital of Fiji, there was this issue of manhandling.

On October 8, Taiwan had displayed its flag in a party in the Fijian capital. The cake being served also resembled the red-and-blue flag of the nation.

It had the local Chinese officials highly upset. They arrived at the public area of the party, claiming to be carrying out “official duties” and found the celebration an attempt to create “Two Chinas” or “One China, One Taiwan.” They apparently tried to take photos of attendees. In the scuffle that ensued, one of the Chinese officials was injured, Zhao Lijian, spokesperson of the Chinese Ministry of Foreign Affairs was to say later.

Gone are the days when Chinese officials posted around the word would issue protest. Now they prefer “enforcing an action” on the ground. And it has a lot to do with Xi Jiniping, China’s supreme leader, urging its foreign missions and embassies, including diplomats and state media workers, to defend the country’s image abroad. It’s no longer good that you’ve just reported the incident to Beijing. It’s for the good of your own career that you showcase what action did you take on the ground.

Last year, a Chinese state television reporter slapped a volunteer at a political conference where Hong Kong was discussed. The matter went to court where the reporter was reprimanded by the British judge. The volunteer had asked the reporter to leave after she had stood up and denounced panellists as “puppets” and Hong Kong “separatists.”

In 2018, Chinese officials forced their way into the foreign minister’s office in Papua New Guinea to argue over the wording of a communique at an Asia Pacific Economic Cooperation Summit.

Zhao, the ministry spokesperson, is a high-profile advocate of “wolf warrior” diplomacy. While stationed in Pakistan, he publicly locked horns with its critics. This year after he was transferred to his high-profile position, he infuriated the Trump administration by suggesting the Coronavirus was brought to China by US soldiers.

Pressure is all the more on officials serving in the South Pacific islands which are the grounds for influence between Beijing and Taipei.

In recent times, the People’s Liberation Army has dispatched a considerable number of fighter jets near or into Taiwanese airspace. There are announcements by China’s domestic security officials to capture Taiwanese spies. The state media outlets are showing footage of a possible invasion of Taiwan being practiced by the People’s Liberation Army. There are discussions in public by military commentators over a possible attack.