Thank you Sunil Gavaskar: And please spot the millions in chorus behind me 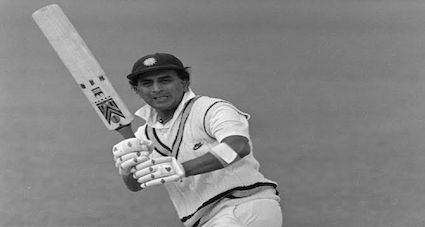 t’s so absurd to write on Sunil Gavaskar. You know about him as much as everyone else does. That he played on uncovered pitches, against a pack of hounds, without a helmet or much of a support cast, our man against the world, a little brown native unmindful of the White Man’s Burden.

It’s also quite useless to import that his time was not one of video analysts, three-dimensions, White Papers on batting, as it were. You learnt on the job. But it was still an unforgiving world. Nation’s mood changed with the gap in your bat. You still lived by the sword of your technique and runs on board.

If you are a young cricketer, perhaps you would understand if I were to ask: You have spent two days in field, now you bat for your two digs over the next three; your partners are 10 on paper but only one or two in essence, the cushion of runs has afforded the Other four slips, two gullies and two short legs, umpires are not neutral, wilfully unmindful that the ball has been scraped, programmed to raise fingers if pads are ruffled as close as the seventh stump, bowlers whose white flannels are bulging with spare sand papers, a licence to bowl from 20 yards or use fingernails if bottle-tops are not in sight. To make sure that the Cross and Nails fit your size, they make you captain too.

I guess I have got you sober now, young fella. How as an opener you prepare for world’s deadliest when your own are no better than to take the shine off, and not retain one on the red cherry. Bowling scoops or machines? You got to be kidding. And not as if India’s famed spin quartet was any easy on you. A certain Bishan Bedi had his own Delhi vs Mumbai code for reason. There were no extra zeroes on cheques, or separate rooms, or enough dough to launder your whites for morrow.

Only a few all through history choose to be champions. Nothing but being Alpha Ape would do. Some are moved by gender conquest, others by fame, glory, riches. Or all of it. You know nobody gives an inch, for they lose one themselves. The higher you are up the pole, bigger is the number shaking it at ground zero. But these Alphas just beat everyone else in the game. You become that escape artist who is teasing the rest, both mindful of the gallery where a few millions have gathered to watch the cock-fight, whistling, raising a din, rustling up the notes for the next box-office, an ingenuity with excuses which they must furnish to cool tempers at home or office.

Next you know, you’ve begun seeing a Sunil Gavaskar in your wide-eyed son, teaching him the grammar, syntax, a vocabulary in which you yourself are quite innocent. But you could spruce up your verandah for those throw downs, avoid a matinee show to help the junior head for the next coaching class. You watch him from the sidelines: Nah Jr, Sunny wouldn’t have played so. Then friendly, then representative, then serious contests beckon, and you hear everyone, across the divide, saying: Did you watch how Sunny swayed, how he dropped his wrist, the V he stuck to in his first hour. Every time a Holding, a Chris Old, a Sarfraz, a Hadlee stood transfixed in follow-throughs, unable to find that tickle or that rattle on his cranium, now closer to stumps, now wider, now from around, our man still in his rhythm, in slow motion, an occasional walk down the pitch, a few taps, and the Act of Seasons repeated over, yet one more time.

That’s how legends grow. Both sides know their lines: One is giving a fresh coat to his Unreal Self with every fresh guard, the other a growing tribe of disciples who are gathering at Mount Sermon to submit to their own version of a Muhammad, a Buddha, a Christ who is never questioned, never argued with, never deserted.These disciples in due course become your Tendulkars and Kohlis.A billion live their dreams in one man.

Gavaskar left game in 1987. But he told us we would see him one last time in the MCC bicentennial match. His innings in Bangalore made the matter of a win or loss so pointless. At Lord’s, against the world’s best, in the home of cricket, he made a young Allan Border go away muttering at the most cultured innings he had just seen in his life.

Sunny was nothing if not timing.

I, like most Indians, had searched my identity in him. I cut my teeth at 17 in a daily as a cub on sports desk because my editor and I got talking on Sunny Gavaskar in the interview.  As a schoolboy I had watched him flick one straight to square leg at 40 (the Bacchus Test). Now I was in press box, watching him drop his bat to Marshall five years later. All this was Kanpur, I doing this little matter of travelling to and fro some 200km from sister-city Lucknow.

In time, I breathed the same air as him in a press box, telling him more than once I used to draw my blood to pray and help him with his centuries, his silence his own eloquence that he has known a few tales more stupid than mine in his career. I ran to stir up his coffee at every “Ashish-aa” on my back, sometimes fetching the last piece of raisin cake he could’ve missed at tea-break.

Over a few decades, I ended with cricket. He is still at it, 50 years to his first day in Test cricket (March 6, 1971), a majority of which now comes to us as wisdom from a cricket sage behind a mike. He is fond of clothes, very much of books, a sharp eye on churning which is forever happening in India. Don’t you make the stupid assumption the man is limited to 22 yards only. But he rather be seen in the Temple we call cricket, and heard, and discussed, and relived by generations.

Thank you Sunil Gavaskar. Thank you for enriching, if not shaping, lives in our Republic. (My own indulgence with two masters, Sunny and Andy Roberts below in Port of Spain, no less).