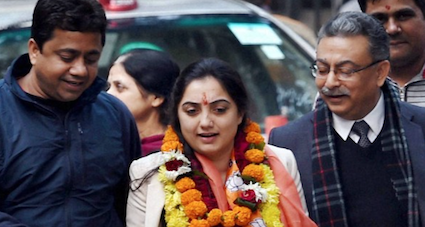 A friend of mine forwarded this below to me and asked me to guess who said it for Nupur Sharma:

“The way she has ignited emotions across the country. This lady is single-handedly responsible for what is happening to the country.

“We saw the debate on how she was incited. But the way she said all this and later says she was a lawyer it is shameful. She should apologise to the whole country.

“She faces threats? (implying she faces no threats) Or she has become a security threat?

“…”But when you (Nupur Sharma) file FIRs against others, they are immediately arrested but when it’s against you, nobody has dared to touch you.

“(Her comments have shown) her obstinate and arrogant character.

“What if she is the spokesperson of a party. She thinks she has back up of power and can make any statement without respect to the law of the land?

“She cannot be put on the pedestal of a journalist. When she goes and lambasts on a TV debate and makes irresponsible statements without thinking of the ramifications and consequences that it will have on the fabric of society.

“This statement by Nupur Sharma is responsible for the unfortunate killing in Udaipur.”

My first guess was one or the other of the Owaisi brothers.

Kejriwal? His associate Sanjay Sharma? Dhruv Rathee? Some of our historians like Irfan Habib or Romila Thapar? Rajdeep, Barkha, Sagarika?

I was losing cool.

I was now running out of names.

Thought of some dopey I could remember for who says: “In- democracy-grass-has-a-right-to-grow-and-donkey-has-one-to-eat”? After all, grass grows in China also, donkey eats in Islamic nations too.

I would’ve never guessed it was two Supreme Court judges, Surya Kant and JB Pardiwala, who said so today while dismissing Nupur Sharma’s appeal to have all FIRs filed against her across the country be bunched together for hearing in Delhi.

I read every line of the proceedings to see if the two judges actually enlightened the nation on what did Nupur Sharma say which was of her own making: FOUND NONE.

I looked if the judges were similarly colourful on the other panellists who made shocking remarks on Shivling at Gyanvapi: FOUND NONE.

I prayed for that one quote which would say that “Dare-Anyone-Try-Taking-Law-Into-His/her-Own-Hand” or “Call-for-beheading-is-barbaric-and-if-not-government-we-order-an-exemplary-punishment-to-them”: FOUND NONE.

I looked for any mention of “freedom of expression” in judges’ off-the-record remarks for after all Hindu gods and goddesses are abused every other day on social media: FOUND NONE.

What do you think would be Nupur Sharma’s fate when the legal proceedings begin for the Supreme Court has already revealed its mind?

And what difference would it make if she apologizes for don’t we remember Supreme Court kept requesting Prashant Bhushan to apologise and he didn’t?

I looked up for Supreme Court lawyer J Sai Deepak’s twitter timeline for he is one name which even judges don’t ignore in this country today:

He termed it a “textbook case of victim-shaming.”

Sai Deepak termed it a “sad day for Bharat” that the “watchdog of the Constitution has contributed to the chilling of free speech.”

There are now demands that the BJP MPs should initiate impeachment proceedings against the two judges for blaming Nupur Sharma for Udaipur beheading.

That some brave lawyer now files a petition, quoting the relevant Hadiths, and asking “Justice for Nupur.”

Nupur Sharma faces a bigger threat to her life today than ever.

I leave the readers with this final word from Anand Ranganathan: