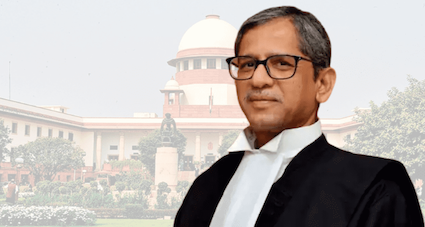 (This is an open letter to Honourable Chief Justice of India, NV Ramana.)

You have often raised voice from public platforms on pendency of cases due to fewer judges.

And that you “have been reminding the government to expedite the process.”

That Nupur Sharma would now have to appear across the country on FIRs filed more or less on the same charge is undeniable.

And it is also irrefutable that this translates into more burden on judiciary, and hence more pendency, which has nothing to do with the government of the day.

For the Supreme Court bench of Justices Surya Kant and JB Pardiwala to not allow clubbing of cases in Nupur Sharma’s case also flies against many such precedents which the judiciary had set in not too distant past.

Akbaruddin Owaisi of AIMIM faced multiple charges of hate speech in different parts of Telangana which were set aside by that state’s high court in March this year, and ordered them to be heard in Hyderabad alone. All this when the trial of the case had already begun and four witnesses had already been examined, as per Dainik Jagran.

“There can’t be multiple FIRs on a single alleged crime,” had urged Owaisi’s lawyer N Naveen Kumar which was acceded to by Justice Ujjal Bhuyan of the High Court.

On September 2, 2021, the Delhi High Court while ruling on the horrific riots in the Capital judged that “five separate FIRs cannot be registered for the very same incident as it is contrary to the laws laid down by the Supreme Court.” The order was passed by the single judge bench of Justice Subramonium Prasad on an application filed by one Atir, seeking quashing of five FIRs.

In April this year one Rahmatullah moved the Supreme Court bench of Justices Sanjeev Khanna and Bela M. Trivedi after he was booked in separate states for allegedly threatening the Karnataka High Court judges who gave the verdict on Hijab row.

The defence of accused’s counsel was that it would be impossible for his client to run around courts and police stations. It was further submitted that the continuance of investigation by two different authorities for the same incident amounts to abuse of process of law.

On April 14, 2022, this Supreme Court bench issued notices to the governments of Karnataka and Tamil Nadu and others in this regard.

Only in May, the Supreme Court accepted the first FIR as the principal one and all other FIRs lodged in the Grand Venice commercial project to be consolidated and said that the “multiplicity of the proceedings will not be in the larger public interest.”

Nupur Sharma might have been guided by such precedents to approach the apex court for her multiple cases in different states, including a Look Out Circular from the West Bengal government.

This is also nobody’s case that Nupur Sharma today faces grave threat to her life for even mere support to her on social media has cost two innocent lives in Amravati and Udaipur.

The observations on her by the two of your colleagues, Justices Surya Kant and JB Pardiwala, has already set public opinion ablaze including some harsh words from judges of your own fraternity.

That it has landed you with an additional petition to strike off the observations, I am sure, is not helping the pendency issue of Indian judiciary.

You have often slammed the police and the Central Bureau of Investigation (CBI) and claimed that it has come under public scrutiny. You had said, and I quote: “…It’s (CBI’s) actions and inactions have raised questions regarding its credibility…”

All of this I am sure stems from your noble desire for people of this country not to lose trust in its institutions.

The public is also privy to the news that you are keen to “start live streaming of hearings in Supreme Court”, ostensibly in a bid to win public trust.

Today, when the observations and judgment on Nupur Sharma’s FIRs-transfer plea is evoking such strong public reactions, one hopes you not only would have your final say on the words uttered but also if a Suo Moto cognizance should be taken on her club-FIRs plea.

After all it’s a matter of public trust.

One of the cardinal principles of common law is the presumption of innocence. From terrorists to those accused of most dastardly crimes, are afforded a fair trial to prove their innocence.

It could be said that no judgment has been passed on Nupur Sharma’s case and mere oral observations would’ve no bearing on the proceedings.

It would be similar to what was observed in the case of Election Commission by the Madras High Court: That the Election Commission was “singularly responsible for the second wave of Covid-19 and its officers should be booked on murder charges probably.”

The Election Commission had then duly moved the Supreme Court, claiming that the remarks had “tarnished the image of an independent constitutional authority” and that media must be restrained from reporting it.

Declining the requests, this is what the Supreme Court had then said:

“This is the celebration of our constitutional ethos which bolsters the judiciary—we cannot gag the reporting of the proceedings.”

For an average citizen, the words of a judge of a High Court or Supreme Court, be it written on oral, hold grave value.

Concerned by rather grandstanding by the judiciary, this is what the President Ram Nath Kovind had said on the Constitution Day celebration last year: That the judges need to “exercise the utmost discretion in their utterances in the courtrooms.”

President Kovind, while quoting Justice Frankfurter of the US Supreme Court, had also said: “Courts are not representative bodies. They are not designed to be a good reflex of a democratic society. Their essential quality is detachment, founded on independence. History teaches that the independence of the judiciary is jeopardised when courts become embroiled in the passions of the day, and assume primary responsibility in choosing between competing political, economic and social pressure.”

An ordinary citizen of India.