They are holding up Parliament and we, who chose them, are silent 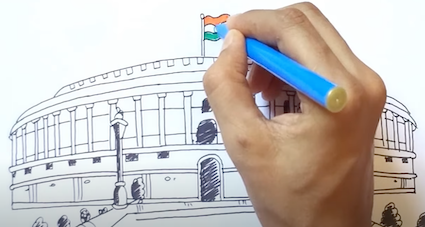 I  am writing this in disgust at how Indian Parliament is driving stink up our nostrils.

You’d have thought our representatives would address our concern at how Covid-19 got out of hand in April-May; if protesting farmers deserve our shoulder or kick on their backside; of whatever happened to hundreds of Hindu families driven out of Bengal, for instance.

But no. These shameless creatures won’t debate lack of ventilators, oxygen, vaccines or hospital beds of our worst times. They won’t discuss bodies floating in rivers; they won’t suspect a trickle of blood in the papri-chat they pose with for obliging Lutyens media. Not for them the supposed hundreds of dead in UP panchayat elections; not for them Central Vista or Rafale anymore. PM CARES Fund? Are jobs, economy, fuel prices no longer issues? Migrants?

Why, Is Covid over? Do we know who was the villain of this piece they kept repeating ad nauseam in the newspapers? Were they only wasting our time for cheap thrills like tractors and bicycles Rahul Gandhi is driving everyday to Parliament these days?

Why is Parliament not being allowed to run? Because the Opposition says Government was Pegasus-spying on them. When the concerned minister, a professional new to the august House, rises up to present Modi government’s position, his papers are snatched and torn to pieces. And how do you think media ought to have reacted? Editors’ Guild has actually gone against government to Supreme Court when it should’ve hauled the pathetic MP through the coals.

But this pattern of shoot-and-scoot is consistent. Not long ago, Adhir Ranjan Chowdhary of Congress was asking the President for a special session of Parliament on Covid-19. Sanjay Raut of Shiv Sena too had sought the same. Now when the Parliament is on, they don’t want it to function!

Before the start of the Monsoon Session of Parliament, prime minister Narendra Modi invited the Opposition for talks. Congress itself had asked for the all-party meet. But then Pegasus was chosen as a ruse to stall the proceedings even as the government gave a statement on the matter in both the Houses. Without wasting a minute.

You see these stallers together one day, you don’t the next day. When Congress calls for a meeting, Trinamool is absent. When Trinamool does likewise, Congress is missing. Now you have such adorable pics (see image below) in your newspapers. Now you also hear both are having breakfast together. Where does it leave people?

You can count the tangible loss. These MPs are elected after hundreds of crores spent in elections; they draw salary and perks; they are to represent us in the temple of India’s democracy. We see them shaking in anger on TV debates and frothing foul in newspapers. And when they have chance to confront the “villains” they have built up in our eyes, they slink away behind the wall of Pegasus spyware. Possibly in fear that their propaganda would melt in the spotlight.

Some say, deny MPs the salary. Some say disqualify them en masse. I would say Election Commission should either deny them another bout of electoral contest or deduct 50,000 votes from their next count. India is being held up by these charlatans. India should also have a way to hold them up. A few rogues can’t hold this country to ransom.