They are ready to join separatists, break Punjab: PM’s veiled attack on Kejriwal 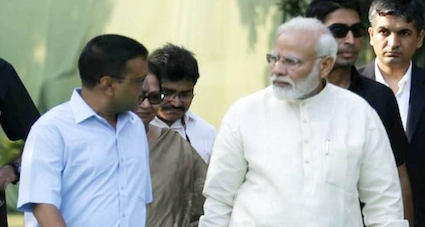 Launching a veiled attack on Delhi CM and Arvind Kejriwal and said that they are ready to join hands with separatists and break Punjab. ‘Their agenda and the agenda of India’s enemies are same’, PM further said

In a blistering, yet veiled attack on Arvind Kejriwal, the AAP supremo, prime minister Narendra Modi in an election rally in Abroha, Punjab, said today that such people want to “break Punjab” and would not hesitate in joining hands with separatists to be in power.

“Their agenda and the agenda of India’s enemies are same,” said Modi.

It was in reference to a claim by former AAP member Kumar Vishwas that “Kejriwal had told him he will be either CM (of Punjab) or the first PM of an independent nation (Khalistan).”

Modi also claimed that history has been witness to Congress betraying farmers. There was a long pending demand to implement recommendations of the Swaminathan Commission. “They sat on those files but kept lying. When we formed our government at the centre, we implemented those recommendations,” remarked Modi.

Modi appealed to people of Punjab to vote for BJP, and the “double engine sarkar”, which would take action on sand and drug mafia and create employment for youth.”

Modi remarked that no industrialist is willing to invest in Punjab due to the bad policies of the ruling Congress government. “The kisan community wants good produce with less investment…a BJP government can provide this.”