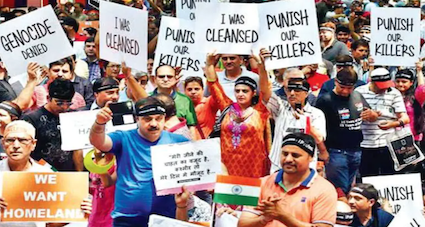 (This is a talk by Sushil Pandit, a well-known Kashmiri activist, on what minority Hindus have lost in the Valley they called home. It’s a most powerful oratory which shakes you to the bone. It’s a must read for so-called Seculars amongst us who preach plurality in their drawing rooms. Bhumika Arora has transcribed this video which is posted at the end).

I’m happy you raise this question of language. Let me share one thing which I missed in my speech with you. When India earned its freedom and gave itself its Constitution, the Constitution had the eighth schedule in which it identified 14 languages which eventually over four occasions grew 22 languages, as officially recognized languages under the eighth schedule of Indian constitution, the original 14, languages had one language called Kashmiri. It still is part of the 22 but it is part of the original 14 recognized Indian languages.

No textbook, no school. No degree. No qualification. No examination. No teachers, nothing no official work. No newspaper. No textbook. Nothing. No literature. Why? Kashmir has chosen for itself a language called Urdu, same Urdu, which was not born in Kashmir but more than thousand kilometers away in the corridor between Delhi and Lucknow called Farrukhabad. The same language, which was the language of mobilization for India’s Partition, the same language against which Bangladesh revolted and came out of Pakistan because they sought to annihilate Bengali the way, Kashmiri is being annihilated to be replaced by Urdu. The same language, which has annihilated local languages in Pakistan. Do you know in Punjab’s provincial assembly If you speaks in Punjabi, your words will be expunged. Pakistan has killed its own native languages: Sindhi, of Balluchi, of Pashto and Punjabi and Balti in Pakistan.

You talk about plurality, sir.

You talk about, I told you, what morality suffers when I give you an example, between Yemen and Morocco, there is no plurality sir. Let me come back to our resettlement. You said that we will not live in separate colonies. I asked you in the very beginning. I don’t know how many of you have lived as minority Hindus, surrounded by hostile non Hindu majorities. When we were targetted and killed and cleansed from Kashmir Valley, we were, living as spread out Hindus all over. We didn’t have ghettos. Despite hostility we live there, we had to come out because we could not live there anymore. Those of my friends who say my houses were burnt by the students, by the friends who we played cricket with, try telling him to go back to the same house and live with the same neighbours. There was an engineer, telecom engineer. Balakrishnan Ganju,  terrorists came to look for him, his family hid him in the rice drum at the attic. They couldn’t search him. They were leaving. Because in Kashmir in mohallas, houses are very close to each other. You open a window. You can see, look into another’s house. When they were leaving, the lady from the next house, called them back. She said, I saw him going up in the attic, look for him there. They came, back went up to the attic, open the rice drum shot him dead in that drum on his head.

Together amongst my own, not to live as a soft target not to live as a hostage in the hands of Jihadis who can turn my neck and butcher me as some kind of a ransom to this country called India.

It is easy to theorize about things!