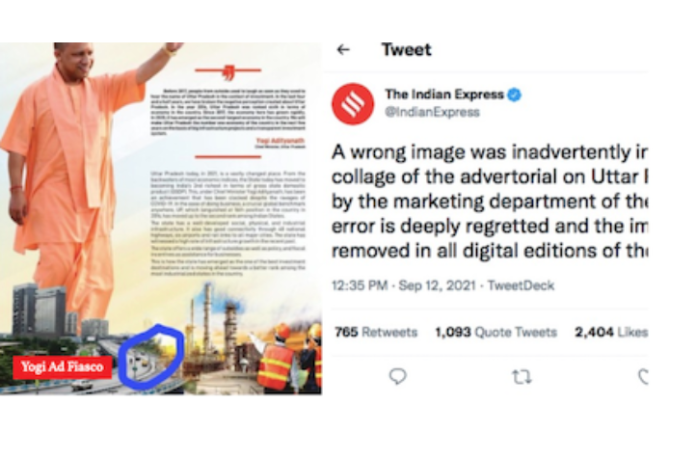 The Indian Express has ended up apologising for the image selection for a front-page advertisement that features a flyover in Kolkata in an advertisement for the Uttar Pradesh Government.

The apology by Indian Express read, “A wrong image was inadvertently included in the cover collage of the advertorial on Uttar Pradesh produced by the marketing department of the newspaper. The error is deeply regretted and the image has been removed in all digital editions of the paper.”

The Yogi Adityanath-led UP government ran a three-page advertisement on the first pages of The Sunday Express, the weekend paper of the Indian Express on September 12. While the pages inside contained claims on the government’s various policies, the first page features a cut-out photograph of Uttar Pradesh chief minister Yogi Adityanath, engineers at a factory and what appears to be the Maa Flyover in eastern Kolkata.

While the paper issued an extraordinary apology, there appeared to be no clarification from people who ridiculed the CM Yogi for the ad.

Trinamool Congress leader Mahua Moitra was one among the few big names, who, in jest, presented it how the Bharatiya Janata Party needs to look to Bengal to “transform” Uttar Pradesh.

She took to Twitter and targeted Yogi Adityanath over the matter.

However, Moitra is often caught spreading fake news, and foul language, and she hasn’t bothered to apologize for her tirade against Yogi’s UP, accused for no fault of its own.

TMC national general secretary Abhishek Banerjee also tweeted how BJP has miserably failed. But now as Indian Express has accepted plagiarism, there has been no apology from him.

So has been the case with Trinamool Congress’ Derek O Brien who was on a retweeting spree on the Yogi government’s ad.

The known Left-Liberals journalists like Vir Sanghvi and Rohini Singh, were jumping up and down in their excitement too.

And so was NDTV who took note of the “event” but didn’t mention in the headline too that Indian Express was the villain of the piece. For NDTV, Trinamool was in splits at Yogi’s ad.

Several social media users also came down heavily on the Indian Express, alleging them of doing it intentionally against the Yogi Government ahead of the assembly elections in the state.