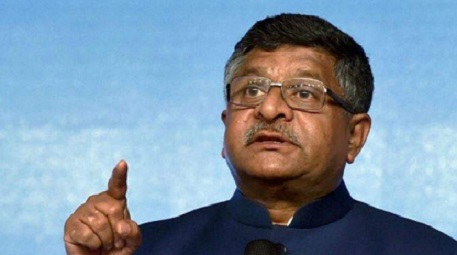 The Central government will take stern action against those attempting to hijack the protests by farmers in Delhi, according to Union Law Minister Ravi Shankar Prasad. He said that anti-national elements were present in the farmers’ protests and they will not be spared. He was referring to an incident during the protests when protesters at Tikri border demanded release of Delhi riots accused Umar Khalid and Sharjeel Imam, along with Varavar Rao, Sudha Bhardwaj and some others.

“We would like to say that Narendra Modi government respects farmers but would like to make it clear that stern action will be taken against ‘tukde tukde gang’ taking advantage of the farmers movement,” Prasad said while launching Bihar BJP’s “Kissan Chaupal Sammelan”.

The BJP has launched a nationwide campaign to clear doubts regarding the recent farm laws that prevail among the masses. Demands are being raised to “free the so-called intellectuals” who are in jails for rioting in Delhi and Maharashtra, he pointed out. They have failed to get bails from courts and their supporters are hijacking the farmers movement but “we will not allow them to succeed in their goal”, Shankar asserted.

Several BJP leaders have alleged that the present farmers movement has been hijacked by the Left and Maoists. Union Agriculture Minister Narendra Singh Tomar had said earlier that protesting farmers should remain “vigilant” against “anti-social, Leftist and Maoist” elements.