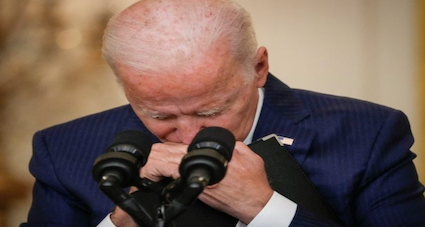 President Joe Biden’s “weakness” in signaling he would not respond to any “minor” Russian incursion into Ukraine is destabilizing to the world as well as American national security, and emboldens others to do similar acts, according to Pennsylvanian Republican Rep. Guy Reschenthaler.

In an exclusive statement to Breitbart News on Thursday following President Joe Biden’s apparent surrender to a Russian invasion of Ukraine, Rep. Guy Reschenthaler (R-PA) called out the president’s “continued weakness” and warned of the consequences of such policies.

The congressman began by slamming the president’s credibility to lead the United States.

“Most Americans do not believe [President] Joe Biden is fit to run our country, and during his first year in office, he proved them right time and time again,” he stated.

Reschenthaler, who served in the Navy Judge Advocate General Corps and volunteered for duty in Iraq, then accused the president of far-reaching destabilization.

He then warned that the president’s “continued weakness” would have further dire consequences.

“Biden erased all leverage in negotiations with the Russians by signalling what he would wrongly accept,” he concluded. “Biden’s continued weakness on the international stage gave [Russian President Vladimir] Putin a greenlight on Ukraine and now [Chinese President] Xi Jinping looks on, emboldened, eyeing Taiwan.”

On Wednesday, at a special press conference to mark the first year of his presidency, President Biden appeared to give up the idea of stopping Russian President Vladimir Putin from invading Ukraine, telling reporters that the U.S. may not aid Ukraine, a longtime ally, in the event of a Russian invasion as long as it is a “minor incursion.”

He did not define the term “minor incursion.”

Biden also predicted that Putin would invade the country and that he could colonize it, but not without significant losses, and insisted Moscow would “be held accountable” but provided no details as to how.

Russia invaded Crimea in 2014 and remains there; Russian troops have already performed incursions into eastern Ukraine.

In response, Ukrainian President Volodymyr Zelensky rejected Biden’s remarks that appeared dismissive of a potential Russian invasion of his country, affirming in a statement to social media, “There are no minor incursions.”

Reschenthaler’s comments come as a majority of respondents to a Politico/Morning Consult poll this week said they believe President Biden was incapable of leading the country.