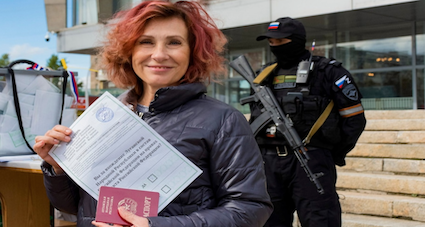 Before the referendums in four regions (Donetsk, Luhansk, Kherson, Zaporozhye) took place which would make them Oblast (administrative unit) of the Russian Federation soon, most grappled with the unease if it adhered to the UN Charter; like they had disapproved the Russian boots in Ukraine as an infringement on latter’s sovereignty.

In the first piece, I had outlined how far out of place the United States has been in flouting the UN Charter in last few decades. I would now take up Russia’s position to offer a comparison.

Let’s first look at Donetsk and Luhansk which had thrown off the yoke of the Kiev regime much earlier before panning on Kherson and Zaporozhye whose sentiments to be freed have rather been recent.

All these four regions—call them east or south-east of Ukraine—(see image below) were attached to the satellite state of Ukraine by the USSR for administrative purposes after the Second World War. They have historically been the Novorossiya (New Russia), a term used to define this region north of Black Sea and Crimea.

Now here are the point for readers’ attention which could clear a lot of mist:

Once the Soviet Union fell, the Ukrainian parliament announced its independence in August, 1991. The held a referendum on December 1, 1991 in which nearly 84 per cent of Donetsk’s suffrage voted in favour of independence.

In 1994, a referendum was held in Donetsk and Luhansk in which 90% voted for recognition of Russian as the official language: This referendum was annulled by the Kiev government.

Now fast forward to 2014 when a US-orchestrated coup was staged to overthrow the legally elected Ukrainian government and the Constitution as it stood was abrogated. (Crimea had the similar grouse of existing constitution being annulled.) In response a referendum on Donetsk status was held on May 11, 2014: Nearly 90% voted for political independence from Kiev.

But then the puppet Kiev government and the US-led collective West declared it illegal, like they had done on referendums by people of Crimea in 1991, 1994 and 2014 who had voted by 90% for autonomy or independence before Russia accepted them as part of their federation.

Same had been the story on Lhgansk but interestingly Russia, which has been demonized as an imperial rogue under Vladimir Putin, didn’t recognize Donetsk or Lugansk all this while.

It would interest readers that Putin, the so-called Hitler incarnate, had similarly not recognized the independence of South Ossetia before Georgia went for its “ethnic cleansing” operation in August 2008. Similarly, Transnistria voted 97% for reunification with Russia first in 2006 and then in 2014 and this appeal again went unheeded by Moscow.

Now let’s look at the case of Kherson and Zaporizhia which would soon be no longer Ukrainian provinces. The two again are heavily Russian-populated region which, like Donetsk and Lugansk, had suffered the ban on teaching and using Russian language by the illegitimate Kiev regime. Interestingly, it’s these two regions who were the first to ask for referendum after the Kiev regime dissolved all political parties and launched a murderous assault for the “purification of the population for collaborating with the enemy.”

As for Russia putting its boots on the Ukrainian territory what option was it left with after the UN and West brokered 2015 Minsk Agreements remained on paper only while the indiscriminate shelling and terrorist attacks by the neoNazis accounted for 14,000 of Donbass civilians killed in a matter of two years, an admission made by the UN itself.

What option Russia was left with after the “red line” of NATO-izing its neighbourhood was crossed and two of its proposals for a peaceful solution in Ukraine in December last year was thrown in the bin?

Be as it may, let’s look at the position of International law on the present matter as per the UN and other global conventions.

But here we have the case of West declaring the present referendums as “sham” and “illegal.”

Now let’s look at how “sham” is this view itself when weighed on the scale of conduct of Western nations.

The truth is these four regions of Novorossiya were at the mercy of butchers. It was a fit case for Minsk Agreement to have been honoured; or for the UN to monitor these referendums. In eight years between 2014-2022, the Donetsk and Luhansk regions held their elections independently, and even invited observers from abroad: It’s another matter that OSCE (Organization for Security and Cooperation in Europe) flatly refused.