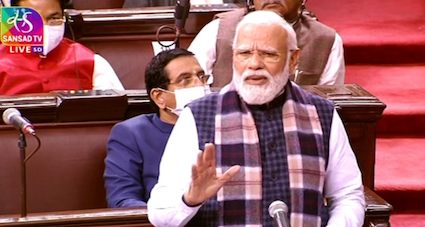 Prime Minister Narendra Modi, in a fierce attack on the Congress and the Gandhis in parliament today, said “talent is the first casualty of dynastic politics” and listed how the country would have been different “if Congress had not there”.

“The Congress’s problem is it has never thought beyond its dynasty. The biggest threats to democracy are dynastic parties. And when a family becomes paramount then the first casualty is talent,” PM Modi said in Rajya Sabha, replying to a debate on government policies.

“People wonder what if there had been no Congress. They are stuck in India is Indira, Indira is India,” the PM said, referring to a Congress phrase for one of its iconic leaders, former Prime Minister Indira Gandhi.

He said Mahatma Gandhi wanted the Congress to be scrapped. “This was Mahatma Gandhi’s wish – he knew what would happen if they remained and said destroy this. If Gandhi’s wishes had been followed, India would have been free from nepotism,” he remarked.

“I can keep counting,” he added.

Hitting back at the Congress for accusing him of destroying federalism, the Prime Minister said the party had a history of dismissing state governments. “They believed in discredit, destabilise, dismiss.”

He also commented that Congress “is trapped in the ideology of urban naxals”.

“That’s why their mentality is destructive. Urban naxals took advantage of the Congress and took over their minds,” said Modi.

In a scathing attack, Modi said: “They are objecting to the ‘Nation’. If the idea of ‘Nation’ is unconstitutional, then why is your party called Indian National Congress? It should be changed to ‘Federation of Congress.”

The Prime Minister also attacked Congress for sacking over 50 state governments of several parties during its over 50-year rule at the Centre.