US Elections: You won’t have the winner for days; months if it goes to Courts 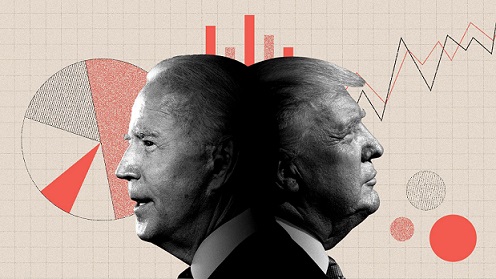 Tens of millions of Americans are casting their votes on Nov. 3 in an election that has already broken turnout records before the polls opened on Election Day.

More than 95 million people had already voted early by the eve of the election. More than 60 million of the early votes were cast by mail, increasing the likelihood that the final outcome won’t be clear due to the delays some states allow for the receipt, processing, and counting of ballots.

Election officials in some states can begin processing ballots weeks before Election Day, which includes removing ballots from envelopes and lining them up for counting. In other states, ballots can’t be legally processed early, a limitation that will force local officials to conduct an in-person election while processing a flood of early-vote ballots. The issue is likely to be exacerbated in states that haven’t updated their systems for the new workload.

A presidential election hasn’t stretched beyond Election Day since 2000, when ballot irregularities in Florida led to weeks of chaos and court battles.

A number of states allow absentee ballots to arrive in the mail after Election Day, including Ohio, a crucial swing state where ballots can be counted if they are postmarked before Election Day and arrive before Nov. 13. Ohio is to report the count if the late ballots arrive no later than Nov. 28.

Both President Donald Trump and Democratic presidential nominee Joe Biden campaigned in Pennsylvania in the last two days before the election. The state’s three-day mail-ballot receipt extension survived an injunction request in the Supreme Court, but could still be struck down via a separate challenge.

Trump has long warned, including at a rally in North Carolina on Nov. 2, that the flood of mail-in ballots and the potential delays could open the door to cheating and result in chaos. Democrats have pushed back against that rhetoric by suggesting the recent changes are necessary to attempt to limit the spread of the CCP (Chinese Communist Party) virus, commonly knows as the novel coronavirus. Left-wing politicians also often claim there is no evidence of voter fraud. A voter fraud database maintained by the Heritage Foundation has documented nearly 1,300 proven instances of voter fraud.

Of the four states where Trump held five rallies on Nov. 2, Michigan and Wisconsin require mail-in ballots to arrive no later than Election Day. The two states where Biden campaigned—Pennsylvania and Ohio—allow for ballots to be counted after Nov. 3.

Mail ballots play an outsize role for Democrats. In the states that report party affiliations for early voting, Democrats have cast 7.7 million more votes by mail than Republicans, according to the U.S. Elections Project. Republicans, in the meantime, are more likely to cast early votes in person, outpacing Democrats by more than 716,000 ballots cast in the states that report affiliations.

Election Day crowns a tumultuous presidential race that included Trump’s exoneration in the conclusion of the Russia probe, the near-collapse of the Biden candidacy in the Democratic primary, the president’s impeachment by House Democrats and exoneration by Senate Republicans, the historic pandemic that scuppered a record-breaking economy, and the recent disclosures about the Biden family’s foreign dealings that were subsequently censored on social media.

In the final dash before Nov. 3, Trump and Biden made their cases in battleground states, describing the consequences of their opponent’s victories in apocalyptic terms.

“If the radical left gain power, they will collapse our economy and send our nation into a depression. Biden will raise your taxes $4 trillion, massively increase your regulations, close down your factories, send your jobs overseas—that’s what he’s been doing all his life, him and his group—destroy the suburbs, dissolve your borders, terminate religious liberty, outlaw private health insurance—180 million people have great health insurance—shred your Second Amendment, confiscate your guns, and indoctrinate your children with anti-American lies,” Trump said at a rally in Fayetteville, North Carolina.

“A vote for Biden is a vote to give control of government over to the globalists, communists, socialists, the wealthy liberal hypocrites who want to silence and cancel and punish you,” the president added.

“On the one hand, we’re facing the biggest threat of who we are, and what we believe and what we’ve seen, what we’ve been in our lifetimes. On the other hand, our future has never been more promising,” the former vice president added.

On the last day of their campaigns, both candidates spoke in states that Trump won in 2016. In Pennsylvania, where Biden planned a campaign finale with Lady Gaga, Trump defied the polls in 2016 and scored a narrow 0.7-point victory over Democratic candidate Hillary Clinton. The president scheduled his last rally in Grand Rapids, Michigan, the same city where he wrapped up the 2016 campaign before winning the state by 0.3 points.

If the 2020 election is anything but a landslide for either candidate, the prospect of legal challenges of the outcome looms large. Biden has said the Democrats have 4,000 lawyers on standby in Florida alone; Trump has hinted he’s also not averse to waging a legal battle. The counting of early ballots will likely be front and center in any challenge.

The CCP virus pandemic monumentally reshaped the presidential campaigns and how people can vote. Twenty-three states expanded access to mail-in voting ahead of the 2020 election as a means to attempt to mitigate the spread of the virus.

(This is an edited version of a piece in Epoch Times we republish here with thanks).