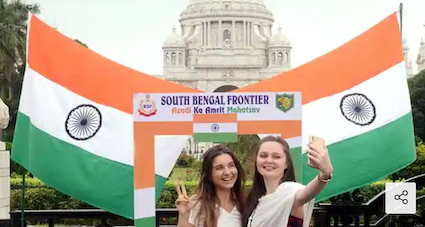 Marking India’s 75th Independence Day, governments and leaders across the globe on Monday poured in wishes for the largest democracy in the world.

The US president Joe Biden, congratulating India and hailing it as America’s “indespensable” partner, said: “As people around the world, including nearly four million proud Indian-Americans, celebrate the 75th anniversary of India’s independence on August 15, the United States joins the people of India to honour its democratic journey, guided by Mahatma Gandhi’s enduring message of truth and non-violence.”

Russia also hailed India as its “trusted partner” in the congratulatory message for the 75th Independence Day. Russian Ambassador to India, Denis Alpov extended “warmest congratulations” to the Indian people. He said, “Russia as a trusted friend extends the best wishes to India on her path of progress for the benefit and prosperity of the Indian people. Jai Hind! Jai Rus!” Meanwhile, British High Commissioner to India Alex Ellis wished India in a message in Hindi saying, “Happy 75th Independence Day to India”.

Australian Prime Minister Anthony Albanese remembered Prime Minister Jawaharlal Nehru’s call for his people to join with confidence in the adventure of their new independence. He hailed the “remarkable” achievements made by India while also recalling the “fond memories” he has while travelling the nation.

He said, “All Australians applaud India’s successes and the many achievements that define this great country and its people”.

The Australian PM said, “On the first Independence Day in 1947, when Prime Minister Jawaharlal Nehru called for his people to join with confidence in the adventure of their new independence, the world could not have imagined how profoundly India would heed his call.”

“The emergence of the world’s largest democracy and the achievements made by independent India have been remarkable,” he added.

Meanwhile Singapore’s government’s wishes were conveyed by the country’s embassy in India. Taking to Twitter, Singapore’s mission in India said, “Wishing India a wonderful 76th Independence Day! Many remarkable achievements by our dearest friends from the world’s largest democracy to be proud of.”