US to sell a billion dollar worth arms to Taiwan; Stop, says China 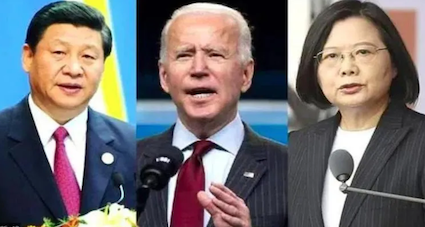 Amid the military standoff in the Taiwan Strait, the Biden administration is planning to sell arms worth $1.1 billion, including hundreds of missiles for fighter jets and anti-ship systems.

According to a report by the Russian news agency, Sputnik, the administration will ask Congress to approve the sale of at least 60 anti-ship Harpoon missiles, 100 Sidewinder air-to-air missiles, and a surveillance radar contract extension.

The major development came as China and Taiwan engaged in indirect confrontation ever since US Speaker Nancy Pelosi visited the island nation this month.

Beijing, on a regular basis, has been conducting military drills near the Taiwanese border– possibly the largest war games ever since both countries split in 1948. This resulted in Taipei increasing its defence budget by nearly 15% for 2023.

“The US side needs to immediately stop arms sales to and military contact with Taiwan, stop creating factors that could lead to tensions in the Taiwan Strait, and follow through on the US government statement of not supporting ‘Taiwan independence,'” Sputnik quoted Pengyu as saying.

According to the spokesperson, US arms sales to Taiwan gravely violate the one-China principle and “Beijing will continue to take resolute and strong measures to firmly defend Chinese sovereignty and security interests”.

US sends its warship to Taiwan

Earlier on Sunday, in a first amid the military standoff in the Taiwan Strait, the Biden administration sent its warships to the island nation.

According to the statement released by the US 7th Fleet, the guided-missile cruisers — USS Antietam and USS Chancellorsville — were conducting a routine transit.

The cruisers transited through a corridor in the Strait that is beyond the territorial sea of any coastal State, it added.

However, China asserted that it has put its armed forces on alert and its forces are maintaining the highest level of alert and they are prepared to defeat any provocations.

It is crucial to note that the Chinese government had warned Taiwan of a dramatic situation for allowing Pelosi to land in Taipei. It had sent 27 aircraft to Taiwan’s air defence identification zone (ADIZ) hours after Pelosi’s plane left the national capital.