Vaccine at last: UK would roll out Pfizer’s on Covid-19 from next week 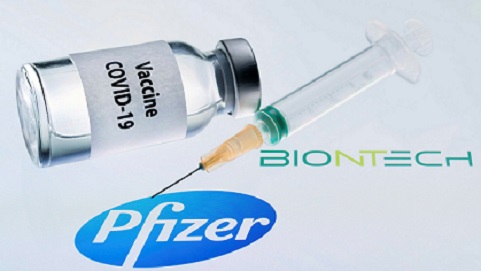 The United Kingdom today became the first country to approve the Covid-19 vaccine developed by Pfizer Inc and its German partner BioNTech SE.

The vaccine will be available in Britain from next week, according to a statement from the U.K. government.

The emergency authorization clears the way for the deployment of a vaccine that’s expected to play a significant role in the global effort to mitigate the deadly coronavirus which has nearly killed 1.5 million people across the world

In the statement, the UK government said, “The government has today accepted the recommendation from the Independent Medicines and Healthcare products Regulatory Agency (MHRA) to approve Pfizer-BioNTech’s Covid-19 vaccine for use.”The UK had signalled it would move swiftly in approving a vaccine as part of an operation to protect its population, and doctors across the country were put on standby for a possible rollout.

The U.K. has ordered enough doses of the two-shot Pfizer-BioNTech vaccine to immunize 20 million people. The companies also have deals to supply hundreds of millions of shots to Europe, the U.S., Japan, and elsewhere.

Pfizer and BioNTech in November claimed that their vaccine was 95% effective in a final analysis of clinical trial data.