Vandalized temple: Has it been stage-managed? 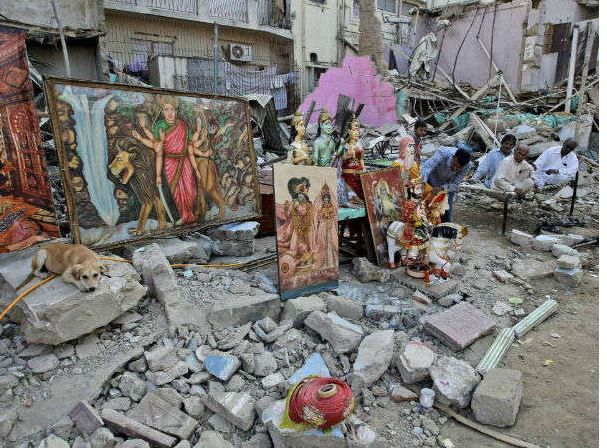 The vandalizing of a Hindu temple in the Walled City of the Capital on Sunday night is being watched closely, and not by the local police alone.

The site is teeming with iconic religious buildings, no better than Jama Masjid, built in 1650 by Mughal Emperor Shah Jahan though Gurdwara Sis Ganj Sahib is no less holy for the Sikhs, built  in the memory of Guru Tegh Bahadur, their ninth guru, whose head was severed by Aurangzeb, a quarter century later.

With elections due in the Capital in over six months’ time, political mis-adventurism is as much feared as the simmering anger of local Hindus for the Durga temple vandalized was over 100 years old and a daily fixture for hundreds of devotees.

There is already evidence that emotions were fuelled by spreading the fake news of a Muslim’s death through mass WhatsApp forwards which led to the violence and broken idols in the vandalized temple.  OpIndia has run a story where it has alleged that AAP MLA Imran Hussain had joined the mob which attacked the temple.

Indeed a trend has emerged where a Muslim mob gather within no time in the name of a stray incident and the violence spreads beyond the local limits.

The matter would not be helped by the mainstream media who would keep a lid on the incident as they usually do when Hindus are at the receiving end. Delhi CM Arvind Kejriwal would hold his silence as would Rajiv Gandhi or Mehbooba Mufti or Omar Abdullah and we haven’t come to Mamata Banerjee or Asaduddin Owaisi yet.

Cine celebrities – the husband-wife duo of Javed Akhtar and Shabana Azmi, Aamir Khan or Kamal Haasan, Swara Bhaskar or Prakash Raj, Naseeruddin Shah or Anurag Kashyap—would have their timelines in twitter under the gaze of millions who are convinced their heart beats only for Muslims.

Nobody expects a Romilla Thapar or a Nayantara Sehgal to educate us on the combustible historical confluence of religious identities of the area which is overlooked by the iconic Red Fort (Lal Qila). There is also little chance that the erudition of a William Dalrymple—who has written more than one book on Delhi—or sophistry of a Ramachandra Guha making even a passing reference.

Millions of Hindus are unlikely to hit the streets across the country since their faith is intensely a personal quest and outward symbols at best are worth reverence but never violence.

This claim is not made in a flourish, as writers are wont to do, but by the evidence of hundreds of such incidents which have happened in the country in the last 30 years.

Yes, Hindu temples have been vandalized or destroyed in varying degrees around the country and if it’s a news to you, you have to blame your newspapers.

No less than Jammu & Kashmir government, much before the imposition of President’s Rule, admitted in the state assembly that “of the 438 temples in the Valley, 208 have been damaged over the years.”

Muslims have ransacked Hindu temples in Bengal; Sabrimala in Kerala doesn’t need a recount here and if you really want a lowdown, it’s easily available on world wide web.

In the past, during its years under the yoke of Muslim rulers, many of the historic Hindu holy sites in Ayodhya, Kannauj, Mathura, Multan, Vrindavan, Varanasi, Thanesar and Prayag were destroyed. Somnath Temple in Gujarat was sacked many a times. Kashi Vishwanath Temple was demolished on Auragzeb’s orders in 1669 and a mosque built in its place.

The ruling dispensation at the Centre is unlikely to inflame the passion even though Union Minister and Chandni Chowk MP Dr. Harsh Vardhan has paid a visit to the venue. The law would take its’ course which could even secure life imprisonment for the guilty under the prevention of Damage to Public Property Act, 1984.  The accused could also be charged under Section 505 of the Indian Penal Code (IPC) for inciting communal violence.

Three have been arrested; more would soon be nabbed as the CCTV footage clearly establishes their profiles. But as said, the incident is extremely combustible and politicians, as we know, are unlikely to let go of such an opportunity.