Vulture journalism of Western media is reserved for distant lands 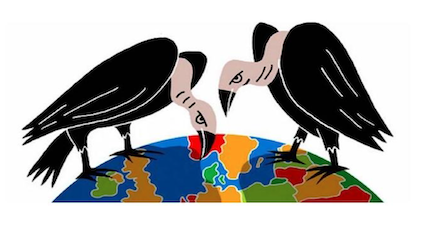 When reporting on any mass tragedy, a basic rule of journalism is to be sensitive to the victims and those who are grieving. Western media, which double as the international media, usually observe this rule at home but discard it when reporting on disasters in non-Western societies.

The coverage of India’s devastating second wave of COVID-19 is a case in point. Western media have been filled with images of dead bodies and other graphic scenes that generally would not be shown following a similar disaster in a Western country. About half of global COVID-19 deaths have occurred in Europe and the United States alone, yet Western media have avoided presenting harrowing images from those settings.

Even at the height of the pandemic in the US and Europe, it was unthinkable that television crews would barge into emergency rooms to show how overwhelmed the doctors and nurses were. Yet such scenes have been broadcast internationally from inside Indian hospitals, with little concern for how the intrusion could affect life-or-death decisions. Television journalists have also swarmed Indian families who lost loved ones, turning their private grief into a public spectacle for Western consumption.

When covering grief in their own countries, the same media organizations are far more careful. For example, coverage of mass graves being dug to accommodate New York City’s early surge of COVID-19 fatalities featured sanitised images of misty tree-lined fields. By contrast, India’s pandemic experience will be remembered for the haunting images of bodies burning o pyres– images that the Western media beamed around the world.

The funerary fire is a classic trope in Western novels, travelogues, and paintings about India. By directing their cameras to the burning pyres, Western media outlets are satisfying their audience’s morbid fascination with the Hindu tradition of cremating the dead (even though this environmentally friendly practice is increasingly catching on in the West). Utterly ignored in this coverage is the fact that showing ghastly images of burning pyres is a grotesque and deeply disrespectful invasion of what is a very private affair in India.

This is hardly the first time Western media outlets have been insensitive in covering disasters abroad. In the coverage of the 2011 Fukushima disaster, the victims were treated as a secondary issue to the more lurid story of radiation leaks. Western reporting was also rife with cultural and racial stereotypes: the workers who stayed behind to deal with the accident-hit nuclear reactors were dubbed “nuclear samurai,” “human sacrifices” and “nuclear ninjas on a suicide mission.”

In reality, no radiation casualties occurred at Fukushima, owing to the preventive evacuation of the area’s 100,000 residents. But that didn’t stop Western media outlets from feeding the hysteria with false and inflammatory comparisons to Chernobyl. As a result of this sensational coverage, cargo ships started avoiding Japanese ports – even those far from Fukushima – and several countries evacuated their citizens from Tokyo and elsewhere.

Western media bring a similar approach to Africa, portraying it as a continent of heathen hordes, unending disasters, and very few happy, smiling faces. The 2014-16 Ebola epidemic that swept across Guinea, Liberia, and Sierra Leone ultimately killed 11,325 people, meaning that the death toll over two years was roughly the same as the two-day Covid-19 death toll in the US just three months ago. Nonetheless, the Western media’s coverage of the Ebola story was all about body bags, traditional mourning practices, and West African burial rituals. The 2015 Pulitzer Prize for feature photography was awarded to a freelance photojournalist who had followed body collectors and  documented West Africans’ suffering, death, and despair for The New York Times.

Meanwhile, coverage of the COVID-19 pandemic – the greatest global health calamity of our time – did not feature in any of the 2020 Pulitzer Prizes or nominations. And when the 2021 prizes are announced in June, it would come as quite a surprise if any were to be awarded to journalists who documented the deaths from the pandemic in the West. The Western media’s unvarnished coverage of suffering, grief, desperation, and ineptitude is much more likely to come from distant lands. While images of dead American soldiers are rarely published,photographs of dead Afghans, Iraqis, and others are all too common.

True, Western media should not be regarded as monolithic – indeed, Anglo-American outlets dominate. Nor are Western media averse to offering sensational coverage of bad news when it happens at home. But the overall pattern is clear: Western media coverage of tragedies elsewhere tends to traffic in cultural stereotypes and violations of privacy and dignity that would not be accepted at home.

This double standard has important implications. International perceptions are shaped by how the dominant Western media organizations present the news. As the Ebola epidemic showed, sensational images and stories make us think that a dreadful tragedy is even worse or more widespread than it actually is. The Ebola cases and deaths were almost all confined to three West African countries, yet the virus became associated with Africa as a whole.

A journalist’s duty is to inform, not to exploit human suffering with intrusive, voyeuristic, ratings-driven coverage of tragedies in faraway lands. Good journalism rises above clichéd coverage and reliance on shock value. With the coronavirus rapidly mutating and spawning dangerous new strains, we urgently need more responsible, sensitive reporting of these issues.

(This piece by Brahma Chellaney—Professor of Strategic Studies at the New Delhi-based Centre for Policy Research and Fellow at the Robert Bosch Academy in Berline—first appeared in project-syndicate.org. We republish it with gratitude).