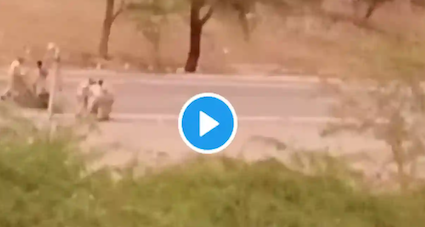 The two men who murdered a tailor in Rajasthan’s Udaipur on camera tried to escape the city on a motorcycle, their faces concealed by helmets, before the police intercepted them.

Kanhaiya Lal, 48, was murdered in his shop yesterday by two men who filmed the crime, gloated about the killing “to avenge the insult of Islam” and threatened Prime Minister Narendra Modi.

Treating it as a terror attack, the centre has asked the country’s frontline anti-terror group National Investigation Agency, or NIA, to take over the case.

Gos Mohammad and Riyaz Akhtari, the two men seen in the video, were arrested last night.

The two men sped the bike on a highway on the outskirts of Udaipur as they tried to escape, Rajsamand police chief Sudheer Chaudhary told news agency PTI.

A police team guarding a barricade flagged them down. When the two tried to escape, the police overpowered them and arrested them. All this was seen on a video tweeted by a citizen.

Kanhaiya Lal, a father of two sons, 18 and 20, had complained about death threats over his social media post in support of BJP leader Nupur Sharma, who was suspended by the party over her comments on Prophet Muhammad on TV.

The state government has announced a compensation of ₹ 31 lakh for the family and jobs for both sons.

A day after violent protests, the situation is calm in Udaipur except for sporadic minor incidents, the police said.