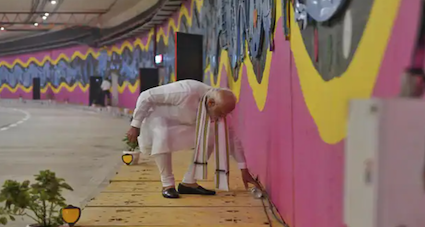 Prime Minister Narendra Modi has made it clear that leading by example is how his government’s ‘Swachh Bharat’ or Clean India Mission programme should be implemented at the individual level.

During an inspection of the ITPO tunnel in central Delhi, PM Modi was seen picking up litter from the road in front of a large colourful mural of traditional arts.

“Even during inauguration of the ITPO tunnel, PM Narendra Modi ji made it a point to pick up garbage and ensure cleanliness,” Union Minister Piyush Goyal said in a tweet, which also has a video of the Prime Minister.

This project had to undergo several obstacles including Covid…And then there’s no dearth of people in our country who knock on the judiciary’s door, disrupt the process of such projects but we made it through,” PM Modi said at the launch of the Pragati Maidan Integrated Transit Corridor.

The India Trade Promotion Organisation, or ITPO, in central Delhi’s Pragati Maidan comes under the Commerce and Industry Ministry and it showcases excellence achieved by the country in diverse fields, especially trade and commerce.