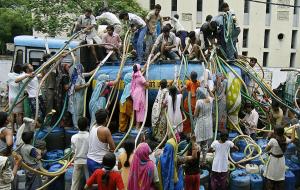 Last fortnight has been terrible. Taps at my flat in Mumbai seems to have run dry.  My room partner Manasi and I literally seem to be relying on tears. Mumbai, I am told, has 30% deficiency in water supply due to poor monsoon.

I am glad though it happened. It woke me up to water that we take for granted. I learnt that our thirsty cities are completely parched. In some cities, the difference in demand-supply is a yawning 70%. Imagine what happens when 500 million more people join our cities by 2025. Cities like Delhi, Bangalore and Chennai already ferry water as far as 200kms from their outskirts. Thus left with no recourse, this deprived peripheral humanity will storm your cities and protests, riots, torching would follow. For example, the bloodshed over sharing water from the Bisalpur dam between villages and the city of Jaipur is too recent to ignore and paints a scare water future.

And what about your food supply since our dwindling farms lack irrigation and surface/groundwater seem to serve multinationals such as Coca Cola?  And lest you forget, water is required too for wildlife, vegetation and rivers itself. The less said about electoral politics—such as Delhi-UP conflict on Ganges water—the better. Let Indian states remain busy in squeezing subsidy funds out of Centre rather than develop its water management resources.

The irony is, India is one of the wettest countries in the world. Between Cherrapunji’s 11,000mm and Jaisalmer’s 200mm, India averages 1170mm of annual precipitation. Just half a century ago, India was acknowledged as a water-rich nation. Now several regions have turned into deserts.

So what happened? Please tighten your belts and brave the following reality:

·          Water tariffs are lowest in India’s urban centres. In cities like Delhi and Mumbai, water is supplied at Rs 0.5 and Rs 1.6 per cubic metre.  However, marginal poor in cities of India—some 170 million—end up paying to water tankers etc through their nose. It’s up to 20 times to what the rich pay and that too from unreliable sources.

·          Almost 80 percent of the water leaves cities as waste of which less than 20 percent is treated. The rest pollutes rivers, lakes and groundwater. Meanwhile, the government subsidy for water keeps accumulating at over a billion dollars a year. That’s a double whammy for poor. One, they don’t get water. Two, what they get is literally the untreated sewage flushed down by the rich.

·          82 percent of our villages rely on groundwater for domestic use.  Now this groundwater is being extracted by water tanker economy which in six big cities itself is worth over Rs 100 crores. Then there are packaged-water companies; the soft drinks multinationals to suck it dry. For instance, there is a long-standing conflict between Coke and the Placimada village panchayat. Groundwater legislations in states such as Rajasthan, Maharashtra, Orissa and Himachal Pradesh actually work against villagers’ access to groundwater. Over-extraction has left to “well-fields” around Indian cities. The less said about its effect on farming—and farmers’ suicides—the better.

·          Given the situation, the surface water would have to contribute no less than 65% of our total water requirement in decades ahead. This requirement is just not for residences. Your electricity supply and industries need water too. But where are the ponds and tanks? Marginal rivers have run dry due to encroachments by building mafia and conniving municipal administration. And have I forgotten the polluted major rivers?

·          On paper, mega cities like Delhi and Mumbai receive almost enough water today. But that’s on paper only. No account is made of leakage, faulty engineering and poor maintenance. Mumbai hardly harvests its water. Governments as usual wake up late. For example in Gurgaon, a major water supply network was only built 20 years after all those high-rise buildings had come up.

·          All this will leave a huge burden on our farms to produce food enough to meet demands by 2050. Since our cities take in a lot of cereals, our food output may have to rise 50% over present levels. Farmers are thus encouraged to grow crops that result in improved profits. But to grow rice and wheat, the water supply is grossly insufficient. According to an estimate, a whopping investment of Rs 560,000 crores would be required for irrigation networks in next three decades.