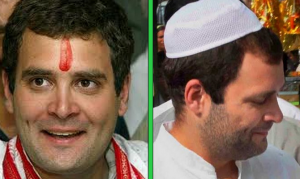 Congress President Rahul Gandhi, in choosing to contest from Wayanad in Kerala, has opened itself to the charge of siding with allegedly Muslim extremist organizations which could lead a Hindu backlash against him and his party in 2019 General Elections.

One of Congress support in Wayanad emanates from Indian Union Muslim League (IUML) which in turn is tied up with Jammat-e-Islami and Social Democratic Party of India (SDPI), both accused by National Investigation Agency (NIA) in conducting arms training camps across the state under the pretense of health awareness camps.  In several police raids in the offices of PFI and SDPI in Kerala, weapons and arms-stockpiling came to light in 2014. As many as 24 accused arrested belonged to these two parties.

Four SDPI activists claimed responsibility for hacking two CPI (M) members at Mangalam, Tirur on January 29, 2014. SDPI’s district president had then justified it as an emotional reaction from its members to an attack the CPM effected against one of its members the same morning.

In 2014, SDPI made a private school in South Kerala submit to their demand of removing Vande Mataram from their Independence day programme. It also made the school drop the Namaste gesture. The SDPI had then claimed that a number of parents had complained against some words in Vande Mataram and the gesture Namaste against their religious beliefs.

CPI(M)state secretary Kodiyeri Balakrishnan said on Sunday: “Gandhi is contesting as the candidate of Congress-IUML-Jammat-SDPI. Congress should think whether seeking support of Muslim extremist organizations would benefit Congress at the national level.”

All this trouble of being in league with Muslim extremist organizations looks a still far worse decision given that the Congress victory margin in 2014 in Wayanad was only 20,000 compared to over-a-lakh margin in 2009. In the 2016 assembly elections, four of the seven assembly segments in Wayanad were won by the CPI (M). Of the remaining three, only two are in Congress control and one by its ally, the Indian Union Muslim League (IUML).

Rahul Gandhi clearly wants to ride on the 68 per cent share between Muslim (48%) and Christian (20 %) voters in Wayanad which became a Lok Sabha constituency only in 2009—a tacit admission that Hindus en bloc are not going to vote for Congress.

But the ground reality today is markedly different as dissatisfaction against Congress is growing by the day, as reflected in drop in support on the following counts:

It is certain though Rahul Gandhi must have weighed the pros and cons of his decision.

For one, it could reignite the flagging spirit of Congress workers in Kerala, a state where Congress senses a sizeable share in the 2019 General Poll.

Together with Kerala, and hopefully in Rajasthan, Madhya Pradesh, Gujarat, Karnataka and Chattisgarh, Congress hopes to cobble up enough seats of its own to be the front runner in case the anti-Modi gang muster enough numerical numbers to form a government in the Centre.

The theatrical Congress mouthing fire against Mamata Banerjee or being rubbished by Commies in public; the spurn of Arvind Kejriwal, the disenchantment with Chandrababu Naidu or squabbles with Lalu Yadav/Tejashwi Yadav would be flushed away in a jiffy if and when the feast of power presents itself to these set of opportunists.

The reverse is equally true: perhaps more stark than these fair-weather friends have taken into account and Lutyens Media has done its best to hide it.

So much for those who chest-thump in front of cameras as the true defenders of secular and non-communal Nehruvian ideology.