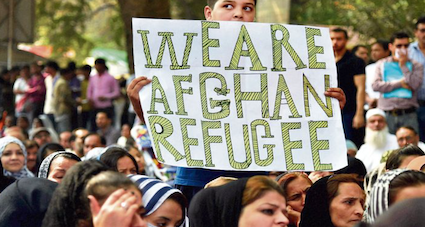 The Citizenship Amendment Act (CAA) looks in offing even though the Modi government has sought an extension till January 9, 2022 for its rules to be framed.  Union minister Hardeep Singh Puri has used the backdrop of crisis in Afghanistan to assert that CAA is necessary for Hindus and Sikhs of the mountainous country.

There is every reason, in view of imploding crisis, for the government to bring the date forward. It doesn’t appear that the Modi government would bow to orchestrated “Shaheen Baghs” across the country to defer it any further.

For sure, hell would break loose when the rules are framed and announced. But Afghanistan is a good plank for the Modi government to press home a long-pending CAA. It was passed in Parliament in December 2019 and was notified on January 10, 2020.

Normally, the rules are framed within six months of an enactment of a law. Without it the CAA couldn’t be enforced. But a mixture of

the resultant anarchy and Covid-19 pandemic put a spanner on it. It was also perceived as if Modi government had developed cold feet. It encouraged the anarchists and Islamists in the country.

The result has already been tragic. Hundreds of Hindu and Sikh refugees in Gujarat, Rajasthan, Madhya Pradesh, Maharashtra and Delhi have returned to Pakistan after a year-long wait since their visas expired and they couldn’t get the extension from Pakistan.

CAA must not be confused with citizenship being granted to migrants of six minority communities of 13 districts who have documented evidence of their background and who have completed 12 years of residency in India. CAA is to provide citizenship to undocumented minorities from these communities from the neighbouring Islamic republics of Pakistan, Afghanistan and Bangladesh. These minorities—Hindus, Sikhs, Jains, Parsis, Buddhists and Christians—who had come to India till December 31, 2014 due to religious persecution will not be treated as illegal immigrants but given Indian citizenships. The CAA was also part of the BJP’s manifesto in this year’s assembly elections in Bengal and Assam.

The horrific scenes from Afghanistan tell the unfortunate tales of Indians who remained in these new countries and face religious persecution. And it’s not as if it’s Modi government’s one-big invention—it’s been oft-repeated by various national leaders in the past, including Mahatma Gandhi.

This is what Gandhi said in a prayer meeting in Delhi on July 16, 1947 with India on the cusp of independence: “If minorities were unable to live in Pakistan, its the duty of the adjoining province on the side of the border to extend them with both arms and extend to them all legitimate opportunities.”

This is what he wrote in a letter to Krishna Das, a writer whose book “Seven months with Mahatma Gandhi…” is a fine academic account of his visit to Assam. Gandhi wrote: “The poor Hindus who will migrate owing to oppression will certainly be accommodated in India.”

Jawaharlal Nehru? Well, this is what he said on November 5, 1950 in the Parliament: “There is no doubt, of course, that those displaced persons who have come to settle in India are bound to have the citizenship. If the law is inadequate in this respect, THE LAW SHOULD BE CHANGED.” (Listen, you Congis).

In March 1964, Union Home Minister Gulzarilal Nanda said if the honour and lives of Hindus are not safe, “the door has to be kept open…”, a sentiment echoed by CPI MP Bhupesh Gupta. Once Bangladesh emerged, another CPI leader Gautam Deb worried on account of the religious persecution of Hindus.

As recently as on April 20, 2010, Assam chief minister Tarun Gogoi pleaded with the then prime minister Manmohan Singh to grant citizenship to those who fled religious persecution at the Partition. CPI M MP Basudev Acharya demanded amendment in the Citizenship Act in 2012. The very same year, in the 20th Congress of the CPI-M, a resolution was passed demanding rights for Bengali refugees. Prakash Karat, CPI-M general secretary, wrote to Manmohan Singh about the plight of Bengali refugees.

In 2003, Atal Bihari Vajpayee gave special powers to some border districts of Rajasthan and Gujarat to grant citizenship to Hindu and Sikh refugees from Pakistan and Bangladesh. Dr Manmohan Singh wanted a more liberal approach towards refugees after Partition.

And frankly, what option the Modi government had but not to amend the Citizenship Act after it abrogated Article 370 in Jammu and Kashmir? Tens of thousands of minorities had crossed over from Pakistan after the Partition in the hope of refuge in own homeland called India but to their horror of horrors, it was denied as Jawaharlal Nehru played along with the whims of Sheikh Abdullah which made minorities unwelcomed and unrecognised in Jammu and Kashmir.

Who are these anarchists who are today denying the undeniable footprints of history? Hindus and Sikhs from Afghanistan have kept coming over to India for decades now. The two major flashpoint have been the assassination of presidents Daoud (1978) and Najibullah (1996) followed by the rise of Pakistan-based Taliban. Same has happened in Bangladesh where Hindu refugees haven’t stopped coming over due to persecution by Islamist forces who are denying them even the right to pursue their religion.

There are two other nonsense which needs to be swatted aside. One, that CAA is loaded against Muslims from these three Islamic neighbouring countries. It’s not. Muslims are getting citizenships in India in thousands. But the CAA is only for non-Muslim persecuted minorities. It’s like any sporting event where galleries are reserved as per their denominators. A generally galley viewer can’t demand a VIP entrance in the name of equality. In the last six years, over 3,000 Muslims have been granted Indian citizenship. It’s touching a thousand Muslims from Afghanistan. India is also accepting Muslims from Bangladesh.

The other nonsense is to link National Register of Citizens (NRC) with CAA as a proof that it’s an exercise to discriminate against Muslims. It’s not. In 2010, the then home minister P Chidambaram himself had begun the enrolment for the National Population Register (NPR) on the basis of Aadhaar. Infiltration in India is a reality and NRC is meant to weed the illegal entrants out. As far back as in 1950, the Constituent Assembly had observed that at least three lakh Muslims had entered India illegally.

It had led to Immigrants (expulsion from Assam) Act 1950 to enable to Central government to remove outsiders whose stay was deemed detrimental to Assam’s interests or India’s safety or Scheduled Tribe in Assam. Even then, the Hindu refugees were exempted.

No countries allows illegal entrants. It’s a job of the state to protect its borders. Even when Jews came to Kerala in 70 AD or descendants of the Prophet to Sindh after Karbala (680 AD), Parsis to Sanjan (8th century), they could only stay after receiving permission from local rulers. After independence, Tibetans, Bahai’s and others have been given refuge. You enter a country illegally, and fatten yourself on bogus citizenship and ration cards, is simply not on. And you must be shown the door.