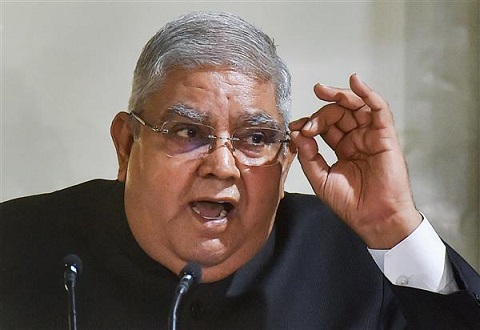 West Bengal governor Jagdeep Dhankhar has attacked the ruling Trinamool Congress Party, accusing them of indulging in politics over accordance of security cover.

The state government recently withdrew the security provided to three close aides of discontented TMC minister Suvendhu Adhikari for speaking against the party at a rally.

Adhikari, who is maintaining a distance from the ruling TMC and the state cabinet, on Wednesday said he has come up through hard work and is an elected leader, not a selected or nominated one — a comment which did not go down well with the party’s top brass.

According to sources, it is also to believe that Adhikari was missing from several important party and cabinet meetings.

Dhankhar mentioned that he would like to know that if the state government has come to such a position that a person’s political behaviour will now act as the determining factor for the accordance of security cover.

He further claimed that local officials after receiving orders from the party apparently delayed Bhartiya Janata Party MP Jagannath Sarkar’s visit to a martyred soldier’s home in Nadia district and one would be astonished to learn of such behaviour.

“Working under influence of political considerations on issues such as providing security cover is a blow to any democratic set-up,”

Sarkar has alleged that he was “made to wait by some officials” for nearly 30 mins when he went to pay homage to the martyred soldier.