West is engaged in “hybrid war” against Russia, says its FM 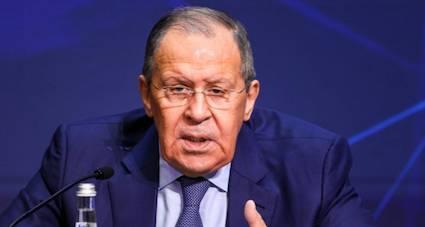 Russian Foreign Minister Sergey Lavrov on Saturday accused the West of launching a “total hybrid war” against Russia. Lavrov stated that it would be difficult for him to predict how long it would last and stressed that the consequences of the war will be felt by everyone.

Speaking at the 30th Assembly of the Council on Foreign and Defense Policy (SVOP), Lavrov highlighted that the West is no longer considered an “ideal of freedom and democracy” and their actions have led to these countries losing the impression of reliable partners, TASS reported.

Sergey Lavrov further asserted that Russia is making every effort to not have any direct confrontation with them. However, he stressed that a challenge has been thrown on Russia and they will “accept it.”

He said that the West is ready to be against Russia which he pointed out that they say “to the last Ukrainian.” He called it a ‘convenient stance’ and accused the United States of scuttling all the processes.

As per the TASS report, Lavrov noted that the European Union is now gradually integrating with NATO on issues of security. Lavrov highlighted that European Union has indicated signs of losing independence and working in the interests that are favourable to the United States.

The Russian Foreign Minister further claimed that the West has abandoned all decency, and rules to authorize any “hostile action” against Russia including “robbery.” Lavrov censured the West’s actions of mass expulsion of Russian diplomats.

Highlighting Russia’s relations with other nations, Sergey Lavrov stated that India and Russia are developing a privileged partnership while a strategic partnership is being developed between Algeria, Egypt and Russia. He added that ties between Russia and China were currently the best they had ever been and stressed that ties with the countries of the Persian Gulf, the Association of Southeast Asian Nations and other countries in the Asia-Pacific Region, the Middle East, Asia, Africa and Latin America continue to reach a new level, as per the news report.

The statement of Lavrov comes amid the escalating crisis between Russia and Ukraine which continues for more than 80 days. Following Russia’s military operations of Ukraine, several EU nations have imposed sanctions against Russia and are providing military and economic assistance to Ukraine.