What next from anti-Modi brigade? They won’t squander a propaganda built over months 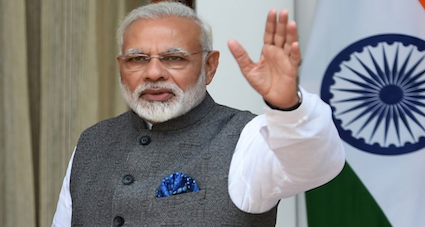 Oxygen over. Vaccination over. What next from anti-Modi forces such as Opposition and newspapers like Indian Express?

Now that Modi swept the floor on Monday, Opposition is claiming victory on Free-For-All vaccination, duly amplified by Indian Express.

The newspaper preened on front page today: “Facing Opp heat…”. There were additional reports in inside pages. Besides quoting the likes of Mamata Banerjee, MK Stalin, Hemant Soren, Pinarayi Vijayan, Captain Amarinder Singh, Ashok Gehlot, Bhupesh Baghel, Raghav Chadha (AAP) and capping it with, as it usually happens, by Randeep Surjewala, the newspaper, inserted its own views that States “were taken aback by the passing off of the responsibility (of securing vaccines)” and that “Centre had not apprised them off the bottlenecks in procuring supply.”

Most of these states are Congress-ruled. What do you think Rahul Gandhi wrote to the prime minister on April 9 (see below): “Give State governments a greater say in vaccine procurement and distribution”. Modi agreed for same on April 19: States could procure and vaccinate on their own. They had time till May 1 to set their house in order. How were States taken aback from this passing off the responsibility,” Mr Newspaper?

Look at the image above and one below. It tells us of Rahul Gandhi and Congress derailing the Centre’s smooth vaccination policy by insisting in early April that procuring of vaccines should be left to States. A month later, as the two tweets show, they were clamouring for Centre to take over, realizing they had eaten more than they could chew.

2. Also want to ask @INCIndia which of these two statements it stands by. Decentralising vaccine procurement on 16th April or Centralising it on May 10th ? pic.twitter.com/jzgG5NjTIX

The same is true of Mamata Banerjee. On April 17, she wrote to the prime minister wanting freedom to procure vaccines. On June 1, she was asking Centre to make vaccines available to States “free”. Today Indian Express is happily quoting her: “Unfortunately, the delayed decision by the prime minister has already cost many lives.”

Then we have Mr Arvind Kejriwal allowed a free pass when he himself had called for vaccination “autonomy” to States. Then of course there was a 180% flip a month later.

4. Also @ArvindKejriwal sir. Could you clarify which of these two positions is yours? In March demanding decentralisation or in May demanding recentralisation of vaccine procurement. pic.twitter.com/DiC8Oj2Ljm

Lutyens Media of course doesn’t calculate the cost of such lies to the nation, if they are not a party to it, that is. They would never probe if this anti-Modi bombardment could be at the behest of international pharma companies who stand to gain billions out of India’s misery.

First create hesitancy on India’s own vaccines, then under-utilize the vaccines provided to them—a report says nine states, all Opposition-ruled, are the worst on the matter—all could be part of a bigger agenda. Is Lutyens Media standing with India or Indians? Or is it hands-in-gloves with such Opposition?

Remember dead bodies? Remember Kumbh Mela and not Protesting Farmers? Remember how our deaths and funerals, tears and grieving became merchandise in the global market, sold by our own news-peddlers?

Why we Indians shouldn’t believe: That all this was meant to take the shine off Modi who had set the pace for vaccination early, its CoWin App was being envied globally, and that the Second Wave was a godsend moment through which Opposition, in collusion with Lutyens Media, could hijack and reverse the narrative?

This Lutyens Media would never question if clamour for States to procure vaccines was an attempt to hoard or blackmarket the life-saver drug as reports are emanating from the quarters of Punjab government?

A minute’s pause is enough to dawn on us that Rahul Gandhi’s narrative falls flat in due course all the time: Be it Rafale, migrant, GST, anti PM-CARES, Central Vista and now Vaccine. Yet this man is allowed to get away with bloopers, like his latest is: “One simple question: If vaccines are free for all, why should private hospitals charge for them?”. It’s like when Centre is providing free education to all, why have private schools? Or if Government transport is subsidized, why own private cars? It’s as stupid as it gets. But Lutyens Media would gloat on it with stupid, screaming headlines.

Zeroing In On Next Agenda

So what do you think is the next agenda on cards for this nexus of Opposition-Lutyens Media? Jobs? GDP? Inflation? Farmers’ protest?

Cynical as it sounds, this anti-Modi cahoots would be hoping that the Third Wave of the dreaded pandemic hits the country before enough Indians are vaccinated. Better still, if heart-wrenching images of our children could be plastered on front pages of Indian and Western media.

Nobody rules out this possibility. The Third Wave mostly likely would hit us before most are vaccinated. Children won’t be safe either.

Modi government’s best bet is that a massive outreach is done to Indians. Hit the info button so everyone keeps hearing, seeing and reading “Mask-Safe Distance-Hygiene” endlessly.

Centre must also find a way to urge States to punish the guilty with fines. And inform us, the Indians, about States who are failing to adopt such measures. Hang them out to dry. Put pressure on Lutyens Media for their culpability. Send your representatives to their Adda, their OpEds, through interviews to highlight their culpability. Keep asking them for audit on oxygen, ventilators, hospital beds and vaccination.

Keep them under the pump. They won’t like the heat to be off Modi. They have built up and sustained a propaganda for months and won’t let it go to waste easily. It’s time to transfer the heat back on them. It could be a game-changer if their propaganda causes an upset in UP assembly polls in a few months’ time.

Be proactive. Not just be reactive. Second guess them. Set your own matrix than be caught in a mangle.

Three incidents have caught my eyes. Hindus in Surat are reciting Hanuman Chalisa on loudspeakers from temples. Residents in Gurugram, for fourth week in...