When 24 farmers were killed in police firing in MP, under Congress’ Digvijay Singh rule 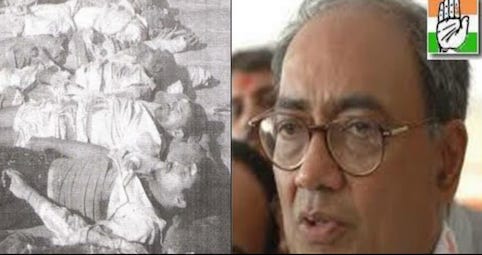 The farmers are protesting at the Delhi borders for over two months now and Congress is busy extracting the lost drop in their honey pot. They are showing themselves as farmers’ messiah. But who are we to remind them of a sorry episode of their governance when 24 farmers died in Multai, Madhya Pradesh and their own Digvijay Singh’s government was in power?

In 2017 when the sordid past of Multai agitation was revived, it revealed the entire chronology of events how the then Chief Minister of the Congress government in Madhya Pradesh, Digvijay Singh had ordered police firing, in a conspiracy to crush the farmers’ agitation for the compensation of the crop failure in Multai.

If you look at the map of Madhya Pradesh, you would notice Betul district in the end. It has a small nagarpalika, Multai. It borders Maharashtra’s Amravati. The nearest airport is in Nagpur, just 120 kms away even though it’s in a different state.

The incident goes back to 1997 when the farmers faced heavy losses due to “Gerua”, a seed-borne disease in wheat that damages the entire crop. Abnormal season rains made the condition even worse and the farmers were on the verge of starvation. The entire crop of soyabean was destroyed.

The farmers tried hard to get in touch with government officials for support, however, none of them were much help.

It was then Sunil Mishra who was a legislator from the Samajwadi party who swung into action. He mobilized the farmers from almost 400 villages of Multai district and made a Kisan Sangharsh Samiti seeking compensation for crops damaged by the adverse weather conditions

On December 25, 1997, the farmers gathered outside Multai Tehsil. After 13 days, the police uprooted farmers’ tents. It was alleged that the police came in at night and demolished the tents. The protesters claimed that the police snatched money that they had brought for ration and forced them to leave the protest site. The protests continued peacefully even after police action against the farmers. On January 11, police allegedly picked some farmers.

The agitating farmers had issued an ultimatum to the then chief minister Digvijaya Singh for meeting their demands by January 11 or face protests. On January 12, the farmers surrounded the tehsil office in Multai. The farmers were in an unforgiving mood In the ensuing violence, the police opened fire at the protestors.  While the official count states 19 farmers lost their lives with over 150 injured, the unofficial count of the dead as per the activists is around 24. BJP was in opposition at that time. They equated the incident to the Jalianwala Bagh massacre.

There were also claims that people who were returning from the rally of Bahujan Samaj Party leader Kanshiram also joined the protest and pelted stones on police officers.

Activists say former legislator Sunilam paid the price for mobilizing farmers while those responsible for killing farmers escaped with minor punishments such as suspension before that too was revoked. A judicial commission had questioned the haste with which officials had been suspended, blaming the deaths only on the violent agitation led by Sunilam.

“Property worth crores were damaged and a fire brigade employee was killed only because he was trying to put out a fire and wearing a uniform similar to a policeman’s,” says then SP (Betul) G P Singh. He says violent farmers had snatched a few policemen’s rifles.

Whereas the farmers were facing adverse conditions, the Batool district collector in his report stated that the crop damage was not more than 37 paise and thus farmers were not conditioned to receive any support from the government.

While police officials mentioned that they started firing after farmers pelted stones on them and even did air firing to warn them, the farmers told that the police did not warn them before opening fire on them. As per the eyewitnesses’ testimonies in BJP’s video, farmers were standing outside the tehsil when suddenly the police started firing. They fired several rounds from the nearby hospital as well. The massacre continued for over 2.5 hours, after which a curfew was imposed in the area.

Farmers, who were named in several cases, alleged that there were no cases filed against the officers who shot them. Fines as much as Rs.10,000 were imposed on all accused, and many of them are still struggling to get justice in the courts.

Sunilam was convicted in the incident and sentenced to life imprisonment. He was in jail for four months between October 2012 and February 2013.