While our hockey boys are scoring goals, some are doing self-goals: Modi 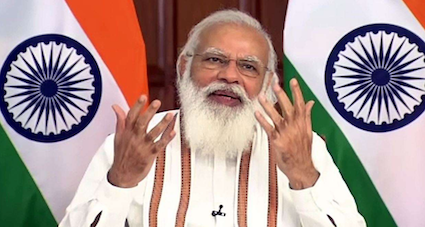 Taking the reference from hockey, Prime Minister Narendra Modi took a dig at Opposition, saying while the country youth is accomplishing so much, scoring winning goals, there are some people who, for their political motives, are intent on self-goals.

PM Modi addressed the beneficiaries of Pradhan Mantri Garib Kalyan Anna Yojana (PMGKAY) in Uttar Pradesh. During the interaction, he also mentioned the hockey team’s phenomenal achievement that won the bronze medal in the Tokyo Olympics after 41 years. It was then when he drew a parallel at the current political scenario where the opposition has been stalling the functioning of the parliament over trivial issues like the Pegasus claims.

“At one hand, when the country is celebrating goals in Hockey, here in the country, few people are busy scoring self-goals here. They are doing everything to stop the progress of this country. They are trying to stop Parliament, but people will not tolerate this,” PM Modi said.

Criticising them, PM Modi said these parties are trying to stop the transaction of business in Parliament, he said in a no-holds-barred attack on the Opposition.

The sole intention of the opposition parties is to create roadblocks on the path of development, the prime minister said, as he termed their action “anti-national”. “Bharat chal padha hain (India is on the move),” PM Modi said.

He said that this “great country cannot become hostage to such selfish and anti-national politics,” adding that “They (Opposition) cannot stop the country from marching forward.”

Earlier also, PM Modi had accused the opposition of insulting the constitution, democracy and the people by not allowing parliament to function.