Who did Poonawalla turn to when hit by cash shortfall? Bill Gates of course 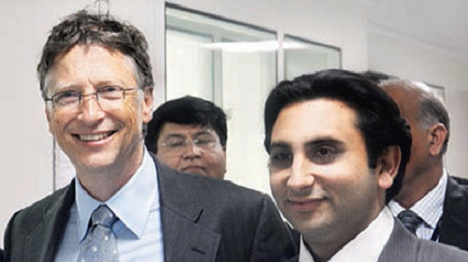 If developing a Covid-19 vaccine is the most important thing, 39-year old Adar Poonawalla is the most important man in India right now. Serum Institute the world’s largest vaccine maker owned by Poonawalla has marched the furthest in the race to stall the pandemic. What makes it more ambitious is his promise to manufacture 400 million doses a month once the vaccine has been developed.

But apart from the vaccine trials, there’s one more thing that kept him occupied. Poonawalla needed approximately $850 million to ensure smooth production of the vaccine doses.

He had invested $300 million of his money but still needed more than a half- billion dollars to bridge the gap. So he turned up to Bill Gates for a tie-up, with an aim to produce a vaccine for low and middle-income countries.

Bill Gates, the Microsoft co-founder and cochair of the Bill and Melinda Gates Foundation, is known for spending much of his prodigious fortune trying to change the world. This time too he had invested billions to help the pharma companies across the world in the development of a vaccine.

Knowing Poonawalla for years, Gates announced that The Bill & Melinda Gates Foundation will provide $150 million to Gavi, which will be directed to the Serum Institute of India (SII) to fund the additional 10 crore COVID-19 vaccine doses for low and middle-income countries.

This alliance had provided an upfront capital to SII to help in increasing manufacturing capacity so that once a vaccine or vaccines, gains necessary regulatory approvals, doses can be distributed at scale to low and middle-income countries as part of the Gavi’s COVAX AMC.

Gates has also funded Covid-19 vaccine candidates developed by AstraZeneca PLC, Johnson & Johnson, and Novavax Inc, and Pfizer. “Those are the ones most scalable and low-cost,” Gates said. His foundation has invested in an entire portfolio of potential Covid-19 therapies and vaccines, including a vaccine being developed in South Korea.

Talking about how his Gates Foundation could mobilize faster than government to fight coronavirus outbreak, Bill Gates said, “Because our foundation has such deep expertise in infectious diseases, we’ve thought about the epidemic, we did fund some things to be more prepared, like a vaccine effort. Our early money can accelerate things.”

Initially, the major target for the vaccine candidates was to get regulatory approval but now the question of how to immunize the much of world population has taken the front-seat. So far, Gates have invested $3.6 billion in funding for research, manufacturing, and subsidies for poor countries. Three companies have promised to provide the vaccine but nine months in, the effectiveness of vaccines is still not known.