Who is this damsel in distress? Why are agencies gunning after her? 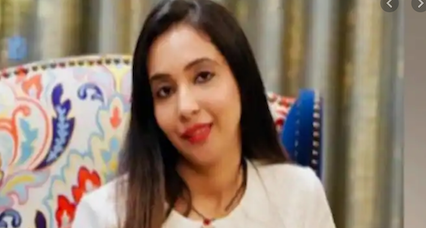 This young lady in picture is in deep trouble. The Central Bureau of Investigation (CBI) has raided her residence. She was once detained by customs for bringing in more gold than allowed from abroad. And her citizenship has caught the attention of Union home ministry.

Rujira Banerjee’s latest trouble is in relation to coal scam which you have read in detail in these very columns. The case with CBI is since last November and relates to illegal mining and theft of coal from Kunustoria and Kajoria coalfields of Eastern Coalfield Limited in West Bengal.

They say that to follow crime, you follow the money trail. So CBI did the same. It found out money transfers from the accouint that were associated with coal scams. It allegedly shows the money not only came in Rujira’s back account bu talso in her sister Menaka Gambhir’s account.

This money had been channelled allegedly through Vinay Mishra who happens to be the general secretary of the Trinamool Congress’ youth wing. It’s the same youth wing which is headed by Abhishek Banerjee, nephew of Bengal chief minister Mamata Banerjee. Importantly, Rujira is married to Abhishek.

Vinay happens to be the chief accused in the case. His house has been raided. He is on run. The CBI has a non-bailable warrant against him. It’s not just coal, it’s cattle scam also, a truly heart-rending stuff which again in detail you could read in these columns. It’s not just on him, the raids have been conducted in 12 different locations. Some of them were out of leads from investigations on Vinay Mishra.

It’s arguable that Rujira is being projected by her husband and aunt Mamata Banerjee as damsel in distress, as somebody who is paying the political price of being connected with the ruling family of West Bengal in the season of assembly polls. Both Mamata and Abhishek have said they won’t be cowed down by these intimidatory tactics of Bharatiya Janata Party (BJP).

But it wasn’t BJP but custom officers at airport of own Kolkata where Rujira was embarrassed for carrying significant amount of gold in her check-in baggage and was detained for a considerable time. Before her political lineage freed her. Besides you can’t fault the Union home ministry for investigating her citizenship issue.

It so happened that in 2017, Rujira had appleid for the conversion of Person of Indian Origin (PIO) card to an Overseas Citizen of India (OCI) card. The PIO card issued to Rujira in 2010 by the Indian embassy in Bangkok mentions her father’s name as Niphan Naroola. However, her marriage certificate, which she submitted as a supporting document for OCI card conversion, mentioned her father’s name as Gursharan Singh Ahuja!

This is not the end of story. In 2019, she applied for a PAN Card. It’s the 49A form which is meant for Indian citizens. But since she has a Thai passport and is an OCI cardholder, she sought to fill 49AA form. If so, PAN cardholders with OCI status are restricted from buying certain properties and engaging in many financial transactions.

So would you fault the due investigating agencies and put the blame on BJP’s shoulders? Or would you find it reasonable for the Union home ministry to ask why her OCI card shouldn’t be revoked since her PIO card and marriage certificate has such glaring discrepancies?

So it’s facile for Abhishek and Mamata to claim that Rujira is being “harassed” only because she is one in the family. You also can’t fault Kailash Vijayvargiya, the BJP’s Bengal chief, as well as former trusted TMC man Suvendu Adhikari, to claim that there are proofs to nail Rujira, and her husband Abhishek Banerjee, as beneficiaries of the coal scam.

“Mishra, who was in the Yuva Trinamool Congress, is close to Abhishek Banerjee and was the latter’s linkman to the illegal coal mining, sand mining, and cattle smuggling scams,” alleged Vijayvargiya. Suvendu Adhikari had termed Rujira as “Madam Naroola” and accused her of being the recipient of money from Lala (Anup Manjhi).

This coal scam is worth hundreds of crores and is spread across Bengal’s borders to Uttar Pradesh, Jharkhand and Bihar. No doubt politicians and bureaucracies have been conduits in this dirty game. Searches by the CBI in this connection have been wide and far and not just in Bengal

CBI has cases against Anup Manjhi and his deputy Joydeb Mandal who is the mastermind behind this multi-crore scam. (As I said, there is no better account than this one you would’ve read in these columns).

Now Manjhi is the primary person who brought Trinamool Congress into the picture. It is suspected that he has some strong connection with whom he shares close ties and it includes some senior officials of TMC, IAS, and IPS officers.

The investigation also has alleged that both Manjhi and Rujira share some links.

The CBI has also reportedly sought details of Rujira’s investments and involvement with some companies as they want to know how there was a sudden increase in the turnover of her company.  A team of CBI officers interrogated her sister at her residence on Monday.

According to Trinamool Congress leaders, Rujira, who keeps a low profile, had met Abhishek when they were studying at the (now-closed) Indian Institute of Planning and Management (IIPM) in Delhi and they were married in a lavish ceremony in the capital in February 2012. Rujira’s father is a resident of Delhi’s Rajouri Garden and owns a mobile gadget shop in the Karol Bagh area. He also had business in Thailand, where Rujira was born.