Who is this returning Arnab Goswami: A resuming one or a rogue one? 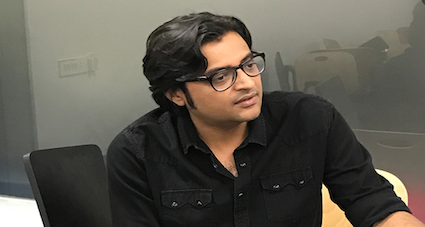 Arnab Goswami is back but in what shape we would see. He admits he and his network were in trouble for a year which is past him but one isn’t sure how the experience has changed him, if at all.

Goswami’s was one moment when every journalist in the land, who opposed the Left-Liberal ecosystem, felt heat on the consequences. He wasn’t one from Ranchi, Ajmer, Hooghly or Bhatinda. They don’t come to our drawing rooms or have a wide readership. Arnab was a brand like few in Indian journalism yet we saw him dragged out and pushed in into a wan for bootleggers, and kept in judicial custody while the police and judiciary, not to say the government, dropped the pretence on “freedom of press.”

We saw him alone, and chillingly helpless. Mumbai Police was intent on finding every section in CrPC slapped on him in dozens of cases. It was motivated, revengeful, intent on crushing his spirit and voice. His was a warning for other right-wingers, a sobering reminder if someone reckoned the ruling dispensation of Bharatiya Janata Party (BJP) would stand by them. It wasn’t just one Arnab but millions with his spirit who felt the shadow of witch.

Pause and think. Your own tribe is throwing inflammables while you stay ringed in a circle of hostile forces who won’t rest till you are finished. They have waited for years for this moment. Now they won’t let it go. With a message to his kindred spirit: We are out to get you and nothing would come in the way.

Destiny intervened. But for that explosive-laden SUV outside Ambani’s abode, Arnab would never have come out of that deep pit of vipers. But the hunters were now hunted and one magical morning, everything against Arnab disappeared. The man was free.

But between his arrest and redemption, a lot had changed. His network was no longer on Sushant Singh Rajput or Bollywood’s drug connection. Palghar and its lynched Sadhus were off the agenda. We didn’t hear Sonia, Sonia again. His public bravado of course was intact. But his material had gone a change. I can’t also confirm the rumours that he had moved out of Maharashtra for his prime time show lest someone breaks into his drawing room again.

Then he went into hibernation and the man now confirms he was recovering from Covid-19. But the period was unsettling. The gratefulness he now has for millions of his watchers was absent in his lack of courtesy to tell them why he was missing. Meanwhile speculations swirled and swirled, every little bit was decoded for hundreds of assumptions. Do we see a critical story on BJP here? Does Capt. Amarinder Singh’s ads carry a message? Would it be a new Arnab now?

So Who Would Be This New Arnab

So who would be this new Arnab? A resuming Arnab or a rogue Arnab? One against the eco-system or one aligned to it. One who sees an alignment with BJP or one who finds them no different?

It’s too much to expect out of one man who surely is not enough to uproot this entrenched ecosystem. But those who see evil in it, like I do, would keep doing whatever they could do to leave a dent on its panels with their pebbles. We all hope over generations there would be enough hands and enough pebbles to bring the house of disrepute down.

Unlike most of us, Arnab has more than just a pebble in hand. He has numbers and he has graduated from pebbles to stones to rocks to boulders and from here on, he could either go for a more powerful projectile or become one of them. He is made for life; famous and rich, and the global network he has in mind is nearer on the horizon. He would’ve offices in New York, London, Paris and Sydney, our own Ted Turner with a fortune of his own making.

Or is it all of his own doing? He was helped in the launch of Republic TV network, unlikely without like-minded forces,  and if same is the script for his global network, then Arnab is only resuming after a pause. Then all is good in the paradise.

Much in our world is rigged. The news you watch, the history you read, the democracy you laud, the human rights you cherish are all delusions. They are Orwellian, meaning completely opposite in essence. Unlike sciences which are exact, the affairs of human beings are selfish. Its all orchestrated to keep you away from truth. In case of non-Western countries like us, the agenda is to keep us divided, weak, guilty of our heritage and keep us nothing more than bleating lambs on a lead.

Once in a while an Arnab comes who finds a way to show us the mirror we missed. It’s only logical he would be dragged through the mud. It’s also plausible he could cower. It’s also feasible he looks back and finds his forces missing, who haven’t come to his aid.

But if this Arnab could rise above his own interest, he could be a game-changer for India and Indians. This existing narrative would only end up in causing Tens of India. Masses are key in this battle. Someone needs to bring them out of this matrix. An informed citizenry is India’s best defence. It’s time India’s all institutions are put on trial by its citizens. Only if the man can still find his baton, it would be a good start.