Who’s afraid of Islam? A question Muslims could no longer ignore 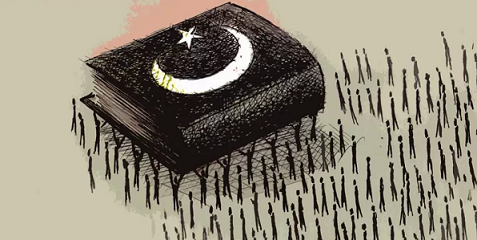 It’s not just France. It’s all over Europe. States might not have said it as openly as Emmanuel Macron of an “Islamist danger” but the rise of Islamophobia in the Old World is relentless. If you think sitting in Delhi or Mumbai keeps you a world away, it’s a dangerous delusion.

Let’s first speak in defence of Islam. Twenty years ago, West waged a “War on Terror”. Muslims could never rest in peace thereafter. My book “How United States Shot Humanity” details their tragedy. We don’t have to go to Crusades. Just two decades back is enough. Innocents died in far greater number than the dreaded; families in millions were uprooted; defenceless and homeless they headed for Europe; some could make it, many didn’t. Lives destroyed forever.

And this was not just foreign lands. At home the West set about putting their citizens under surveillance—Muslims far more than others. In Britain, for example, you are more likely to be searched and questioned if you are a Muslim. The air became thick with suspicion.

It struck a chord with Algerians and Pakistanis and Moroccans and Chechan Muslims who had made Europe their home after the Second World War. The Old World had been torn apart by the Big War. It needed rebuilding. Finances came from the United States. Labour from former colonies, many of whom were Muslims. Now they couldn’t see their fellow co-religionists ruined. Much before, thousands had headed from Europe to make cause with Islamic State (IS) in Middle East.

Societies in Europe were alarmed, they became wary of Muslim neighbourhood, discrimination began and the retaliation followed. Right wingers thought they had enemy next door; the feeling was reciprocated by the Next Door. One thing led to another.

The defenders of Islam thus claim their practitioners are being victimized. When State calls it “War on Terror” all Muslims, and not just Radicals, are put on notice. Innocents, living their normal lives, their kids in schools, their men and women in offices, began breathing toxic air. Hotheads take matter in own hands. The stereotype of Terrorism-Is-Islam is reinforced. When veils or Hijabs are banned in public, it’s seen as an attack.

The other side of the divide: Islamophobia

Those who have Islamophobia, have a different take. They can’t understand how could an author (Salman Rushdie) be hounded for years for what he wrote or why people are beheaded for cartoons. “Freedom of Expression” is the founding tenet of modern Western civilization. The State protects it. Its Constitution guarantees it. Are we to believe than that there is a parallel society, a society within society, which follows different tenets and the world knows it as Sharia Law? That they would follow what allegedly is written in their Holy Book and claim lives, walking over the Law of Land.

It doesn’t go with the idea of multiculturism which the West wanted to showcase to humanity. How could “freedom of expression under house arrest,” be acceptable?

For instance, it’s pointed out many Muslims have not tried to learn French in France; that they don’t send their kids to public schools, opting for “madarsas” instead; there is demand for separate swimming pools for their girls; and that’s how “separatism” is injected from the very beginning.

When Macron warns that “the problem is an ideology, which claims its own laws should be superior to those of the Republic,” it shouldn’t lead to condemnation by Erdogans, Imrans and Mahatirs of Islamic world. It doesn’t help. Certainly not your present and future generations who would be drenched in dripping blood. Instead, Macron’s words should lead to real debate. Just dismissing it as “Islamophobia”—as do “anti-Semitism”—is dangerous and self-defeating. Inclusiveness could only happen if both sides begin looking within.

Even if Islamophobia is decried, there is little doubt it has gained enormous currency in last two decades. You could ignore it but the elephant is in the room. France has 6 million Muslims, more than anyone else in Europe, so we could understand why right-wingers like Marine le Pen have such a persuasive influence. But others are no better. Vlaams Belang in Belgium, the Sweden Democrats for example now hold the narrative.

Half of Germany feels there is a “fundamental contradiction between Islam and German culture. In Italy, the figures is 53%. In Finland a staggering 62%. Political parties have flourished on Islamophobia. Street demonstrations against Islam are everyday.

They call it “Counter-Jihad” ideology. Islamophobia networks have spawned all over. They offer some irrefutable logic: If Islam is not repressive, how do we term its treatment of women. How are we supposed to react to Chopping Squares. How are we to comprehend rulings where evidence, cross-examination and witnesses are dispensable.

Good Muslims would suffer, and I have said it many times, till they don’t oppose the Bad Muslims. Till they tell them that we have all the freedom to practice our religion at home and we are not bothered about others. We won’t take law into hands nor approve if radicals override the established laws. It’s not enough that 99% are good if they are handmaiden to the remaining 1%.  The future of Islam is in their own hands. Sense of persecution won’t help. Sense of responsibility would.