Who writes for Julio Ribeiro?: A question Fadnavis ought to ask Indian Express 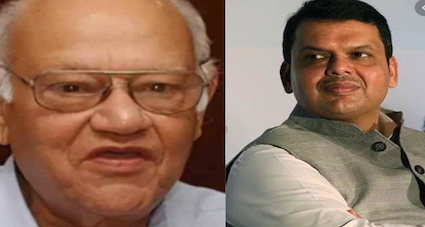 Is there somebody who is writing on behalf of former Mumbai police commissioner Julio Ribeiro? Or is there someone who is taking advantage of his advancing years—he is 91 now—to publish pieces  on his behalf which are defamatory and could cost a few crores if not years behind the bars.

So it would appear.

He mentions the incident when Fadnavis recently went to a police station in Mumbai which had been interrogating a manufacturer of Remdesivir on the possibility of “illegal supply” of the drug.

Ribeiro found fault with Fadnavis on these counts: (a) Only state government decides supplies from factory to distributors; (b) private individuals doing it is not on; (c) it deserves a separate excise department inquiry.

(He also says that BJP has failed in the Sushant Singh Rajput case—this when the case is still on!—but we would let it go).

It’s by now well known that Fadnavis did take permission from the Maharashtra government. That Maharashtra’s Food and Drug Administration minister, Dr Rajendra Shingne, himself has admitted it. This is what Shingne said:

“I was aware of it. The BJP leaders had met me at my house along with the manufacturers’ representatives. They offered to help us procure the Remdesivir stocks for the state government and I agreed to it. The entire process was done following all rules, with due permissions and with genuine intentions to help the citizens,” said Shingne to a TV channel.

I am not here to insult an old man at an age when people get senile but somebody needs tell Ribeiro the facts. I certainly don’t expect Indian Express to do so. If they don’t know the facts and yet published an OpEd under Ribeiro’s name, they must withdraw the piece, offer an apology to readers in “Regrets” column which they do almost daily these days. Or the newspaper must be accused of being a party in this on-purpose “fake news.” In the eyes of readers, both Indian Express and Ribeiro are at a grave fault of misleading them. Fadnavis could ratchet up the heat if he desires so.

There is a reason I feel one must know whether Ribeiro indeed is writing his own pieces. After the Delhi Riots, when Delhi Police were filing the FIRs against accused, Ribeiro had then written a letter to Delhi Police Commissioner, calling the investigation a “miscarriage of justice.” He was particularly upset that “true Gandhians”, Harsh Mander and Apoorvanand, were facing action.

The Delhi Commissioner, SN Shrivastava, was aghast at the charge. Amongst other things, Shrivastava replied that when he confronted Ribeiro on the phone, the latter confessed he didn’t have first-hand information about the cases! A host of distinguished ex-cops had slammed Ribeiro for his “activism” and attempt to “demoralize” the police force.

Ribeiro seems to defend questionable people. Harsh Mander in the past was with Open Society Foundations run by notorious George Soros who feeds anarchy and civil wars in peaceful but independent countries. Ribeiro had also defended “Urban Naxals” such as Gautam Navlakha who is alleged to have links with Pakistan’s ISI.

Together with Mander, Ribeiro specialises in writing open letters under a collective, called “Constitutional Conduct Group.” Interestingly, all the letters they write is directed against the present ruling dispensation at the Centre.  Be it Citizenship Amendment Act, Ram Janmabhoomi, Sadhvi Pragya or Sudarshan News channel, this collective reserves its “activism” against Conservatives of India. Somehow this Collective don’t seem to find fault in non-BJP state governments or other political leaders.