Why Abdullahs, and even Congress, is not talking of restoring Article 35A and 370? 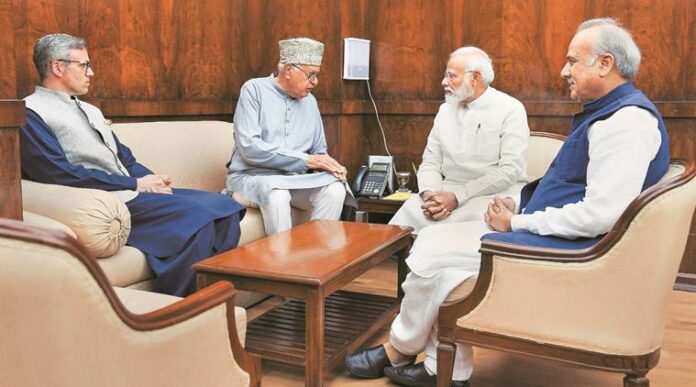 (This is the seventh piece in the special series on Jammu and Kashmir. Here are the first six pieces I , II , III , IV ,  V and VI )

During the past few days, one thing being repeatedly discussed in the political circles of Jammu and Kashmir is “Gupkar Declaration”. Most people in Jammu are unaware of what this declaration is about, so to say its nitty-gritty.

In Kashmir, on the other hand, it is often being paddled as a panacea that will define the way forward in the political domain. It has been written about in sundry newspaper columns and debated on various social media platforms.

Incidentally, it refers to a declaration made after a meeting of political leaders of various parties in Srinagar on August 4 (Sunday) at Farooq Abdullah’s residence last year. His residence, as also of many powerful people in Kashmir, is located on Gupkar Road and hence the name.

Let us first discuss the atmosphere that prevailed throughout J&K at that time. It is worthwhile to recall that all tourists had been ordered to leave the state at the beginning of August 2019.

Amarnath yatris in transit were told to return to their homes and further yatra was stopped. Yatris visiting Vaishno Devi were also sent back and the Machail Mata yatra in Paddar area of Kishtwar was also disrupted. Similarly, lesser known pilgrimages to some other shrines in J&K were not allowed.

Deployment of additional troops of the Central Armed Police Forces (CAPFs) all over the state was also done simultaneously. This created panic, mainly in Kashmir valley, and residents began stocking up dry rations.

Speculation was rife in the air that the Central government was about to take some drastic action. Some people said that a war with Pakistan was imminent while others said it was likely that Article 35 A and 370 were going to be eliminated.

After discussions, they made a declaration of fighting the Central government unitedly.

They said that: (i) They were together to protect the identity, autonomy and special status of J&K; (ii) Any modifications of Article 35 A and 370 were aggression against people of Jammu, Kashmir and Ladakh; (iii) They will seek audience with President Ram Nath Kovind and Prime Minister Narendra Modi.

These three were the focal points of the Gupkar Declaration. Of them, not one has any salience now, a year later, special status is long gone. Article 35A has been done away with and Article 370 amended beyond recognition.

As for the third point regarding meeting the President and the Prime Minister is concerned, that too has lost meaning. The Gupkar Declaration was conceived at Farooq’s residence and its demise may have already been announced by his son Omar Abdullah some days ago.

In fact, Omar wrote some days ago that he will work for the restoration of statehood for J&K. There was no mention of restoration of Article 35-A or bringing back 370 in its earlier avataar. Can this be interpretation as the NC having reconciled itself to fair accompli on these articles?

Congress leader Ghulam Nabi Azad recently talked about restoration of statehood and holding assembly elections for return of a popular democratic government. In some recent interviews in Jammu recently, Union Territory Congress chief G A Mir sidestepped on 35A and 370.

That leaves PDP and since Mehbooba Mufti is still in detention under Public Safety Act (PSA), it is not clear what her stance on the issue is. Of course, as numero uno in the party, apparently she alone can decide the party line.

Some days ago, Sajad Lone of People’s Conference was released from detention. However, he would be articulating his views on 35A and 370 only some days later. No other leader of the party has spoken on this issue.

Who all gain from Mehbooba’s continued detention? It helps National Conference of Abdullahs, J&K Apni Party of Altaf Bukhari, the People’s Conference of Sajad Lone as also the Congress. Almost every mainstream political party of Kashmir, except PDP who is rudderless without her.

What do we make of the Gupkar Declaration then a year later, on August 4, 2020? It seems talks of unity across the political spectrum were sheer humbug. In the electoral arena, most of them are rivals and ideological glue is not strong enough adhesive to keep them together.