Why do Test captains prefer economy from bowlers? Why not trade wickets for runs? 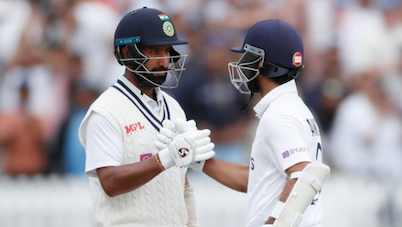 Two Tests and you know one thing. Both India and England want bowlers who are both misers and lethals. Modern Test captains don’t like leaking runs. It’s termed controlling the game. But what happens when batsmen play your sweet game and bat out the time, never mind the dot balls which swell like your unpaid taxes?

So it crossed my mind as the Lord’s Test reached its end game on Sunday. India were couple of dozen runs ahead but three of its best had already cut a sorry figure. The two new in the middle were short on trust from own benches as they were in themselves. Yet Cheteshwar Pujara and Ajinkya Rahane lasted nearly 50 overs and over three hours. For a large part, they had faced more overs than made runs. England just couldn’t see their backs.

Batsmen can afford to be defensive if they are not forced on front foot often. More so if the pitch is yielding, and not naughty with tantrums like some of our elders become with age. Anderson was showing his; Wood’s best was gone and Curran was darting too low and too wide and Robinson too short and too high to hit pads in line of stumps.

How England would’ve wished for one who was lethal, never mind if he wasn’t miserly. A leggie, all arms and flailing legs, tossing above the ear, beyond the eyeline, who just can’t be defended and offers tangible rewards to fielders in the deep. He might have gushed a few but England could’ve saved a couple of hours. By the time the truth was driven home, and Moeen and Root got into the business, ignoring even second new ball, India had negotiated the day.

Why are captains so averse to leaking runs? Why buying wickets is not an option with them. Leaving off-side open and inviting a cut is not aggression. As it is not to keep your best fielder at long-off to a tossed ball when you’d have better chance with a mid-off at the edge of circle. Why do we remember a Pataudi or a Mark Taylor as gambler of a captain?

I am sure by now you must be thinking if this approach has done in our Ashwin. A returning Ishant Sharma was preferred to him in this Test, never mind if our beanpole with acceptable haircut now was rusty. Sharma was not a better bowler than Ashwin in these conditions, he is certainly not a better batsman than our Tamilian, but he was preferred for that “control” which is gospel for modern captains.

How often is Ashwin tonked? His economy of 2.80 runs per over in 79 Tests suggests not often. Oh, then he must have been found wanting on English pitches. Wrong: His economy is just about the same here—2.85—as it is his overall. He is as successful or as unsuccessful too as Jadeja is in England who is yet to pick a wicket in two Tests.

But this piece is not about Ashwin. It’s about the programmed captains of our times. Do we have instances of wild captains who preferred more lethal to less miserly? Is history any guide in the matter?

So I looked at the best bowlers ever in Test cricket. The Top 10 have just one bowler (Dale Steyn) who had conceded more than three runs per over in his career. The next set of 10 again had just one bowler (Makhaya Ntini) with this dubious distinction. Next set of 10 has three sore thumbs but by now we are in the bracket of 300-wicket club. Its astonishing that among all Test bowlers who had 200 or more Test wickets, none went beyond 3.47 runs per over and Brett Lee should take out reporters often lest the readers become wise to his infamy.

So expensive bowlers have rarely lasted. Or it would cost captains the Test and their own careers. They breed contempt for themselves in facing batsmen and choicest from those at short leg. And this is not just Test cricket: Even in mohalla, school or provincial games, they don’t last. Cricket soon becomes a memory behind you desk- job.

One of cricket’s charm is that a counter-intuitive question is always around the corner. That both Root and Kohli have been rather apologetic in keeping a spinner in the side, preferring a quartet of pacemen, why not trust the tweakers, three of whom are in the top five in all-time list (Murali, Warne, Kumble)? Who knows if Ashwin joins them before ranting on mike that he is destined to after his career?

Trust this game to make you appear a fool again. History again shows that these three august spinners are exceptions. World’s most successful Test bowlers have always been pacemen. A Harbhajan or a Lyon pop out once in a while but by and large wild success has been the preserve of fast men.

A Cheteshwar Pujara and Ajinkya Rahane were as likely to fall to a pacer as they were to a spinner as long as they were enticed enough. Or brought out on front foot often. England didn’t do it long enough, even choosing the stupid ploy of bouncing out Pujara who rarely pulls and would rather put his body on line. It’s also a fact that England are still in the game only because of a spinner as Moeen Ali took out two in eight balls. This alone ought to bring Ashwin in the mix now as a fading summer is the best time for these types in these parts.