Why do you think Punjab was not letting go dreaded Mukhtar Ansari? 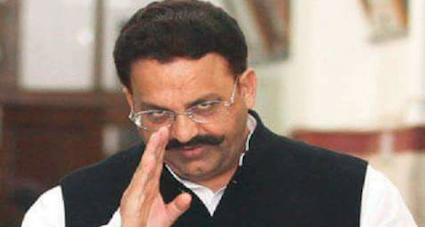 Now that dreaded mafiaso Mukhtar Ansari is in Banda jail of Uttar Pradesh, it should interest us why Punjab wasn’t willing to let him go to  his original state where he had 52 cases against him and which had to move Supreme Court, no less, to gain possession of him.

Trust me it’s worth your time. Even if you can’t place Mau on India’s map,  or don’t know why the region is believed to be the worst  for any farmer to be in, parched like hell, don’t ignore this India which is creeping all around you and swallowing you minute by minute.

Let’s presume that you don’t know who Mukhtar Ansari is. By lineage, he is the grandson of Mukhtar Ahmed Ansari who was president of Indian National Congress in 1927 and later of Muslim League, in due course becoming the founder, and then vice-chancellor of Jamia Millia Islamia University for a good eight years (1928-1936). His father, Subhanullah Ansari, was a Communist leader.

The present Mukhtar Ansari wasn’t growing any startlingly different from any other teenager when a series of development projects were launched in his Poorvanachal region. If you could lay hands on contracts for mining, coal, railway construction, scraps, public works, liquor business etc, you could be a king sitting on a pile of a few hundred crores. Ansari proved to be more muscular than others, and with brains too for he joined Bahujan Samajwadi Party (BSP) and owned his Mau constituency for five terms.

Such men are useful to politicians in more ways than one. There is cut-money of course but there is terror factor too which smothers political opponents, like BJP MLA Krishnanand Rai who had hundreds of bullets from AK-47s pumped into him in 2005, a fatal retribution for daring to defeat Ansari’s brother in an assembly election.

Ansari by know had much of political class in thrall to him. Nobody flinched at the growing number of criminal cases against him in his filled nomination papers. When caught, big officials came to his jail to give him company over a game of shuttle. Biggest cops looked to catch his approving eye for it ensured they were in good books of ruling class. All went swimmingly well till Yogi Adityanath came to power in 2017 and Ansari had himself transferred to Punjab on a flimsy case of extortion in Mohali. This was early days of 2019.

For the last two years, Ansari had stayed put in Ropar jail in Punjab. In these two years, he was never presented in court. As many as 54 dates summoning his presence went to waste as blood-pressure, back-pain, skin allergy and many more ingenuous ways were found to stall his appearance.

Interestingly, no investigative report on his case was ever presented. The man never moved a bail application too! Apparently, Ropar Jail was to his liking. And apparently facilities and people were at his beck and call.

Hard as Uttar Pradesh government tried to gain his control to make him account for his crime, Punjab never let that happen. No less than 26 warrants against him didn’t work. Finally, Uttar Pradesh had to move the Supreme Court. Mukhtar was defended both by his own solicitor and the one appointed by the Punjab administration. Their names, Mukul Rohatgi and Dushant Dave should ring a bell for readers of Indian Express. Rohtagi has been a former Attorney General of India and Dave is a senior advocate and president of Supreme Court Bar Association until recently.

Supreme Court lost little time in ruling in Uttar Pradesh’s favour. It was bemused why one state was so keen to deny other state a right to pursue justice against a criminal who had committed crimes on its land. Tushar Mehta, representing Uttar Pradesh, believed Punjab was being shameless in protecting Ansari.

So why do you think Punjab was protecting Ansari? I have been reading Hindi daily “Dainik Jagran” lately and one of its associate editor Rajeev Sachan offered an interesting analogy:

The United States is seeking extradition of a Dawood Ibrahim right-hand man Jabbir Motiwala, from England where he is lodged in a London jail. In response, Pakistan’s diplomat in London has claimed that Motiwala is a respected citizen of his country. There is a lingering fear that if Motiwala goes to US and spills beans, a lot of skeletons in Pakistan’s military establishment and Inter Services Intelligence (ISI) could come tumbling out.

Why do you think Sachin Vaze had such a free reign in Mumbai, despite being just an Assistant Police Inspector (API), having been suspended for 16 long years, having the swagger to drag India’s most reputed anchor by the collar, as it were. And as alleged, daring to startle no less than the face of India’s corporate world?

Why do you think Rajeev Kumar, once the police commissioner of Kolkata, could defy the command of its parent body, be nonchalant about raids at his residence and had no less than the chief minister park herself at his door in his defence?

All this is perhaps easy to decipher for your intelligence. But what should concern you is how hard our Lutyens Media tries that such issues slip out of our attention. If it suits them, a resignation of a professor is big enough to taint India’s democracy. An unfortunate rape is held against a much-admired administration otherwise. But when it doesn’t, a Mukesh Ambani is not enough.

This is Destruction of Memory. The only thing which makes common citizen dangerous for powers-that-be is their remembrance. They want to cheat us out of our only strength; to hollow out our recollection, the erasure of that imprint in our mind.

That’s why, you see, Mukhtar Ansari is important to know.