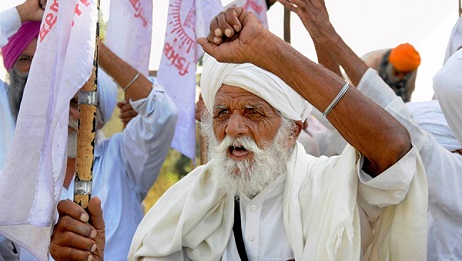 Who would not be moved by the image as the one accompanying this piece. An old farmer, face wreathed in ravines of age, yet of steely eyes, raising the banner of revolt against a heartless government on behalf of his fellow farmers.

Be sure there would be many such images in the newspapers on Wednesday. There could be Congress or other Opposition leaders would have their eyes brimmed with tears. You are unlikely to read that Haryana farmers have withdrawn from the protests; or that the Bharat Bandh call has been shortened to first half or that the rest of the India isn’t much enthused by these theatrics.

I began Tuesday by flipping at the history of agitation of farmers in independent India but my good fortune, I stumbled upon a piece in Live Mint which laid bare a few very significant facts in a write-up as well in graphics. I do little but reproduce them here without much ado.

One, farmer agitation has never been able to summon an all-India support base. The most successful in memory have been one led by Choudhary Charan Singh (70s) and later by Mahendra Singh Tikait (1980s). Both didn’t travel much distance.

Charan Singh formed the Bharatiya Kranti Dal in 1967 and became the flag-bearer of Bharatiya Kisan Union (BKU) in 1978. After his death in 1987, Tikait took over.

Charan Singh largely represented rich and semi-rich farmers. Tikait largely stood for surplus foodgrain producers and it was dominated by big farmowners. It failed to rally the small farmers and agricultural labours under their banner.

Where are big lands and who are big landowners? Mint then proceeds to show that big landowners usually are concentrated in Punjab, Haryana and Rajasthan (see chart below). It naturally means that the big landowning class resides in these states. Farmers, in the rest of the country, don’t have such luxury at their command.

This clearly demostrates that there are wide divergence in farmers’ fortunes. That the average size of land-holding is bigger in north-western belt. How is the ratio of big farms in India vis a vis Punjab and Haryana are also shown in the chart below.

With such divergence, is it any wonder that farmers’ stir struggle to whip up an all-India appeal? There is a huge difference of income amongst farmers. Those in dairy and vegetable business couldn’t care less about MSP. It could be an issue with the large landowners of northwestern belt but the rest of the country isn’t bothered.

Before the 2019 polls, the newspapers were full with the disquiet among Indian farmers. But when results were out, the ruling BJP (NDA) actually succeeded in increasing their vote share by eight percent from 2014 even as its overall share of votes decreased in percentage. (see image below).

The truth is, farmers’ agitation are difficult to sustain in India. The farmers usually respond to castes and communities call. A pan-India movement is difficult to begin and impossible to sustain. There is little denying that as a voting community, there is no bigger block than the one of farmers. But they are fragmented in largely local issues if not by crops and food supply other than grains.

It ought to be a sobering thought to agitating farmers of Punjab and Haryana; the Opposition parties which stand behind them and hecklers from abroad such as Justin Trudeau in Canada. The Prepaid media needn’t worry though: They like being a nuisance and they would bring us aplenty with their write-ups and pictures on Wednesday.