Why Farooq Abdullah and Mehbooba Mufti are singing different tunes? What it forebodes for J & K? 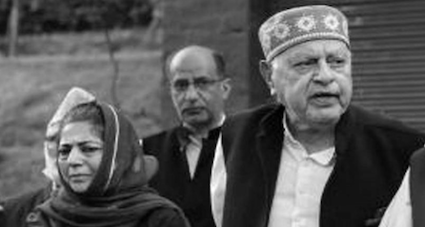 Two main constituents of People’s Alliance for Gupkar Declaration (PAGD), the National Conference (NC) headed by Farooq Abdullah, and People’s Democratic Party (PDP) led by Mehbooba Mufti, spoke in distinctly different voices on Thursday. Farooq refused to utter the very word Pakistan, just saying he wanted to talk about his own country. This was in sharp contrast to what Mehbooba batted for. She wanted the Indian government to hold dialogue with Pakistan, and earlier the better. It reminded one of her father, late Mufti Mohammad Sayeed, who on becoming the CM with the help of the BJP, on March 1, 2015, thanked Pakistan for not disrupting the 2014 legislative assembly elections.

We often hear: Like father, like son. In Mehbooba’s case, we can perhaps say: Like Daddy, like daughter. One thing needs to be emphasised here that she seems to have burnt her bridges with the BJP completely and today’s comments only furthered her alienation from Prime Minister Narendra Modi. In the days to come, we can expect her to adopt a more strident tone on all issues pertaining to Jammu and Kashmir. It is the old avatar of Mehbooba, clad in green overalls, and commiserating with the families of terrorists killed, travelling all over Kashmir to pay her respects, which is likely to be resurrected soon.

In the later part of the year 2015, PM Modi and Mufti Sayeed had addressed a joint public meeting, where else but Kashmir. In his speech, Mufti had harped on the word Pakistan, something of a strong anathema to Modi. Sufficiently aroused and angry, Modi had chided Mufti in his speech later, saying he knew what foreign policy to follow, indicating clearly that Mufti was overstepping his limits. A couple of months later, Mufti got admitted to AIIMS in Delhi, but no senior BJP leader visited him there. Even Mufti’s death in January 2016 was not reason enough for the BJP, which was a coalition partner of the PDP, to try reconciling with Mehbooba.

As the BJP wanted her to assume the mantle of her father, and become CM, immediately in the wake of Mufti’s death, she refused and kept the former on the tenterhooks. It took her a couple of months to accept CM-ship but this period only helped to harden the BJP, and its mentor RSS, stance towards her. Mehbooba’s imperious nature was duly taken note of and factored in all discussions pertaining to her, from here onwards. In the days to come, we can expect a fire-spewing Mehbooba to take rebirth, but she is unlikely to gather much momentum.

At one level, we can expect her to look towards Mamata Banerjee of West Bengal, but there the comparisons end. Mamata had recently won her third consecutive assembly election and the PDP’s best performance has been 28/87 assembly seats in 2014, before that winning 21/87 in 2008 and 16/87 in 2002. So, beyond taking Mamata’s mannerisms of strident speech, Mehbooba seems to be incapable of leading her party to a performance better than last time. In fact, it is widely believed that her party will lose considerable ground to NC and Apni Party in the next assembly elections, whenever these are held.

With the Congress already very sore with her for having toppled Ghulam Nabi Azad’s government in June-July 2008, almost 13 years earlier, the chances for her party look bleak. One can expect her to drop the word Pakistan too often in the days to come. By doing so, she perhaps hopes to fill the void that SAS Geelani’s eclispse and marginalisation of separatists and secessionists have left among the hardcore Jammat e Islami elements lying low.

An interesting scenario may unfold in the days to come as NC and PDP drift apart, with the former looking at opportunities to cosy up to the BJP. This will be another blow which can unravel PAGD as the first was parting of ways by Sajad Lone of People’s Conference. It may soon be time for political one-upmanship in Kashmir again.