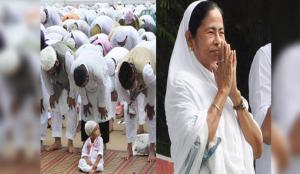 West Bengal chief minister Mamata Banerjee has had her way since the “rath yatra” planned by Bharatiya Janata Party (BJP) is struck down by the Supreme Court.

Predictably there is no outrage in Lutyens’ Media which is par for course since they had similarly ignored Ms. Banerjee postponing the Vijay Dashmi celebrations after Muharram fell on the same day.

Media never devoted columns and editorials when Supreme Court had to step in even for nominations in Panchayat elections last year. There was no outrage in newspapers when 13 people were killed on the voting day itself; in all 50 lives were lost.

All too often Ms. Banerjee cites law and order problem to throw up her hands in despair and media sees no oddity in it since law and order is state subject and TMC owns West Bengal in its iron fist, having won 211 of the 295-seat assembly in 2016.

Media, which cries itself hoarse on the autonomy of Central Bureau of Investigations (CBI) being under threat sees nothing wrong in Ms. Banerjee barring the central agency from operating in her state. They have no problem when Ms. Banerjee pulls out of the Ayushman Health insurance scheme only because all the credit was going to Prime Minister Narendra Modi.

Ms. Banerjee could raise the demons of a “civil war” (on the issue of settlers in Assam) and still be spared a critique. An FIR to arrest RSS’ Rakesh Sinha on his social media posts is nothing alarming in the prejudiced eyes of the media who swear by the freedom of speech as its gospel.

So deathly is the silence of media on affairs in West Bengal that you wouldn’t even remember Jihadi forces rained violence in Bashirat district against Hindus last year. That BJP leaders fled the state by dozens in the wake of the violence.

Media sees nothing communal when “ramdhenu” is replaced with “rongdhenu” in school text books in West Bengal; when a fatwa-issuing Islamic cleric (Maulana Nurur Barkati) against Narendra Modi is emboldened enough to use “lal-batti” atop his car even as the practice is banned; when Rs 2500 and Rs 1000 is given as monthly stipend to 56,000 imams and muezzins of the state (no such windfall to Hindu priests).

Ms Banerjee seems to provoke Hindus no end up like when she appointed Firhad Hakim — a TMC MLA who once referred to Kolkata’s Garden Reach area as “mini-Pakistan”– the chief of the famous 300-years-old Tarakeshwar Temple. One of TMC’s Rajya Sabha member (Ahmed Hussain) is a founding member of the banned outfit, Students Islamic Movement of India; There is Rs. 1.5 lakh worth of state scholarship to those Muslim students who get less than 50 per cent marks at the school level (even as other students, including Hindus, can only secure it at over 50 per cent overall marks). “Those dead during Haj are compensated with Rs 10 lakhs while the Hindu families of those killed in riots get Rs 35,000,” said Tapan Ghosh, then a leader of the Hindu Samhiti.

Even as media has criminally turned its back on these dangerous trends, Hindus seem to be getting their act together in the state. Presently there are 1500 odd RSS shakhas in the state—as against 800 in 2013. BJP is now the main opposition party in West Bengal. A true glimpse of this renaissance would be visible over next couple of weeks when BJP/RSS plan to hold multiple rallies in Bengal.

Hindus, pushed against the wall, might strike back against the present dispensation in Bengal. They are 70 per cent in numbers to 27 per cent Muslims. However, an entitled Muslim population—also bloated by illegal Bangladeshi Muslims in the sate—won’t concede the acquired ground readily. Bengal is sitting on a volcano about to burst even as media wouldn’t let you know.