Why Indian Express doesn’t want to stay on the Tablighi story? 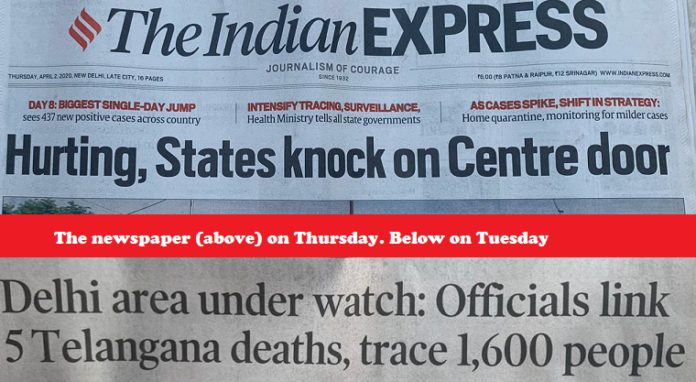 Yes. That’s the charge. A charge its’ readers like me are levelling: Why Indian Express doesn’t want to stay on the Tablighi story?

Express has opted for a banner headline (see the image) today which can’t get bigger even if World War 3 breaks out.

Only, this is not about Corona: It’s about four states “knocking” on Centre for extra funds.

(a)    Who are the states in question? Anti-Modi governments of West Bengal, Rajasthan, Kerala and Punjab of course.

(b)   Have they already asked for funds? Not yet.

(d)   And why states could be asking for funds? Now hold your breath: For returning migrants. Not for Corona victims but for migrants.

(e)   And who are the states who should be in the forefront of seeking help even on migrants? Of course Uttar Pradesh and Bihar. The Indian Express conveniently doesn’t seek these two states out.

So, no funds have been asked, no written or spoken request made, questionable states, questionable source, and that too for migrants and not Corona!!! And yet Indian Express gives a kind of banner headline which most editors don’t give in their entire careers.

This when Tablighi Jamaat fiasco threatens to drown the country in the misery of Corona Virus.

The cases have doubled and crossed 2000 figures overnight.

Many Tablighi Jamaat attendees have gone in hiding.

Official request is making no difference to them.

Could they be bio bombers?

But none of these thoughts prick the conscience of our “newspaper of courage.”

It wants its readers to concentrate on funds a few anti-Modi states “could” ask. This when the Centre is constantly in touch with states to seek out remedial measures. Modi is holding meeting with states regularly.

This is not the sole reason for a reader like me to believe Indian Express is doing its best to bury the Tablighi Jamaat complicity in spreading the Corona Virus. When this news hit the Indians like scalding oil on Tuesday, Express chose to almost bury the story.

That sensational story was not even front page lead in Indian Express that day. Worse, it chose to put a “Delhi area” in the headline (see image), instead of squarely blaming Tablighi Jamaat for the distress it has plunged the nation into. And this I am talking about the Delhi edition of Indian Express.

Don’t you think readers of the city needed a more frontal, and not ambiguous, coverage from its newspaper about its own city? About a story which could put their lives in danger? And what about the residents of the area? They wouldn’t even have an inkling of human bio bombs exploding in their neighbourhood and their chosen newspaper trying to keep them in dark.

I may sound angry. But I am angry. It’s a gross betrayal of readers, if not country, from a national newspaper. It puts doubt in my mind for what could be behind such Indian Express’ coverage. If it’s only about their journalistic competence, it needs to shut its shop. If there is more to it, if there is an interest in spiking this sensational story, then not just Press Council of India but even law agencies need to move in. Tablighi Jamaat has not only cost 10 lives thus far, It has put thousands on the line as well. It could submerge India in political and economic tsunami.

Indian Express would be under my lens for the remaining days of this Corona misery. Forget about Express exploring the Al Qaeda angle of Tablighi Jamaat about which I wrote yesterday; I would look carefully if Express is even reporting the mishap truthfully. As should be their thousands of readers. And authorities.