Why Muslim women are fronting the Islamist agenda? Who’s using them as puppets? 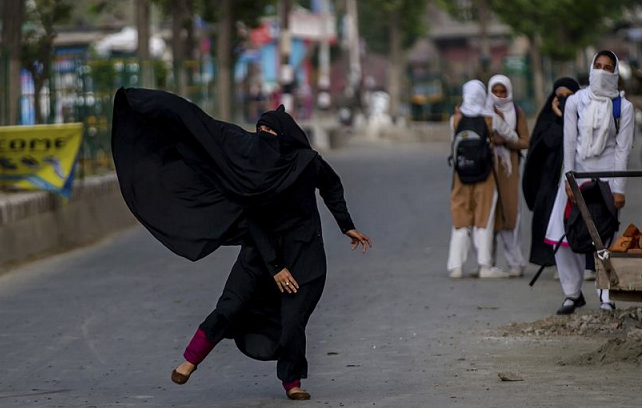 There is an interesting piece in Swarajyamag. Muslim women are leading the Jihadis. It’s an emerging pattern.

We have this instance in Bengaluru where a woman is on screen, asking for severing of head of anyone who insults the Prophet. Never mind a Social Media outrage is a cyber crime and shouldn’t involve killing people, injuring policemen and destroying property worth crores.

A policeman Rattan Lal was lynched during Delhi riots in February, surrounded by women in burqa as murderers did their job in cover.

Ladeeda Shakhaloon, one of the two shero girl—remember, lionized by Barkha Dutt during the Jamia fracas—openly gives call for Jihad on her Facebook page but is the poster girl of “Azaadi” gang.

I am sure most of us remember Amulya Leona Noronha, the girl who chanted “Pakistan Zindabad” in the presence of Asaduddin Owaisi, in a public rally in Hyderabad.

Let’s cast our eyes in Kashmir. Naseema Bano, mother of Tauseef, is seen holding her son’s rifle with a beatific smile on her face.

Insha Jan was arrested for providing logistical support to bombers who effected Pulwama, killing 40 Indian soldiers travelling in a convoy.

All these incidents I have quoted are of this year.

Let’s for a moment concede the point that it’s no Jihadi agenda. That these womenfolk are moved by a sense of injustice. They have heard, or worse suffered injustice, and decided enough is enough. That they there is no institutional support to them.

Yet a few dots don’t connect. There is an alarming number of women being arrested under Unlawful Activities Prevention Act (UAPA). Muslim women are being caught with 20 grenades and 365 bullets (Salma) under the possession. Someone like Nassema was just not posing with gun in company of her terrorist son. She was actively supporting Hizbul in their terror operations.

So, a platform alongside Owaisi is spontaneous? Salma’s anger was good enough to fetch her grenades and bullets from nowhere? All those ammas and dadis in Shaheen Bagh were spontaneous in their outrage? Who didn’t want a solution even as India’s home minister opened his doors and Supreme Court begged? How does one believe in their cause when solution is not on their mind.  What’s it other than holding the Indian state to ransom?

So, if it’s not spontaneous, is it part of a larger design? An agenda of Jihadists? If you think about, it makes complete sense from Islamists perspective. For (a) women and children evoke instant sympathy; (b) it freezes police into inaction; (c) it gives you good press; (d) It dilutes the societal outrage at an anti-India act; (e) it’s impact is worldwide; (f) It drives terror-recruits from young men in families; (g) It legitimizes the violence they harbour in their heart (h) If anything, they want to be a step better than aapas and ammis: If they could be so brave, why can’t I be.

Media is an important tool in this design. Any portrayal of a helpless young daughter, a widowed sister, a doting mother facing state action, is a front-page story. Media could be doing this as an oversight. Or it’s a concerted plan for we never seem to read in their reports on the number of Indian muslim women who are being held under the UAPA today.

As for Indian state, to begin with, they need to track the funding. Follow the money is an old maxim in criminal investigations. And yes, we need more women cops in our system. The rules of the game are changing.