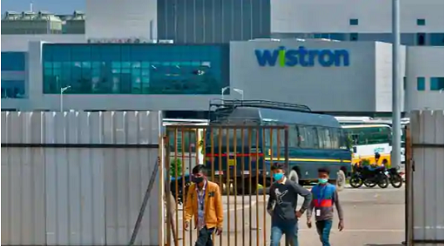 A senior Taiwanese official has raised concerns around India’s land and labour laws following an incident of vandalism and rioting that saw massive damage to a manufacturing unit of Taiwanese firm Wistron Corp operating outside Bangalore, India’s tech hub.

In an interview to Reuters on December 15, James C. F. Huang, chairman of the Taiwan External Trade Development Council said: “We do hope that the Wistron incident in Bengaluru would be resolved as soon as possible and any harm will be controlled and give Taiwanese companies more confidence.”

On December 12, contract workers – demanding back wages and better working hours – vandalized the Wistron facility causing damages of up to $7.2 million after a peaceful assembly outside the facility turned violent,

(There are enough indications that it was sparked by Communist-affiliated trade unions, possibly propped up by China. Qingqing Chen, chief reporter of the Communist Party of China’s Global Times has said that the destruction of Wistron’s plan in India was the potential risk for manufacturers who are moving their production lines out of China—NewsBred).

Wistron’s Bangalore facility was manufacturing iPhones; the company is among Apple’s top suppliers.

The incident comes amid a massive push by India to attract global manufacturers to India through production-linked incentives, as the Modi government pushes the mantra of “Make in India but Make for the World.” But commenting on the damage to Wistron, Huang noted “We are hoping that the Indian side would provide more, and not just incentives.”

The Modi government has renewed efforts to resuscitate the Indian economy as the country’s GDP has seen unprecedented contraction following a lockdown to contain the COVID-19 pandemic. Modi has pitched a “Self-Reliant India” to the Indian public which, operationally, seems to be a push toward curbing imports while increasing exports. His government has also sought to take advantage of post-pandemic supply chain relocation from China and has committed to ambitious plans to increase supply chain resilience.

India’s long tradition of protectionism and state intervention in market operations still reverberates and stands in the way of apparently well-meaning economic reforms, as the ongoing farmers’ protests in the country demonstrate.

In September, India passed three new laws that, according to the Modi government, would stand to boost farm income and increase agricultural output. But protesting farmers – many of whom have congregated on the border of New Delhi and neighbouring Haryana and Uttar Pradesh – claim that the laws would pave the way for big corporations to take over agriculture and adversely affect their livelihoods.

Structural problems arising out of both over- and under-regulation of Indian markets, whether that be in manufacturing or agriculture, continue to plague India’s economy. Unfortunately, neither massively hyped reforms (such as the new agricultural laws) nor much vaunted initiatives (such as a push to attract big consumer tech companies to India) seem to be working as the Modi government had planned.

(This is an edited version of the piece which appeared in thediplomat.com)