With Rajya Sabha secured, BJP could attend to its 2019 Manifesto: How about UCC? 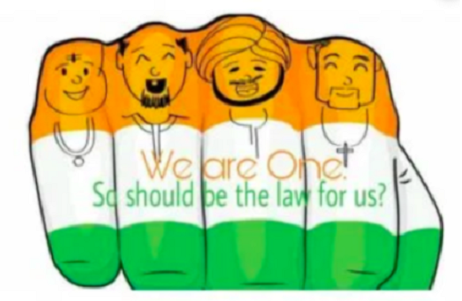 Come elections and the Congress, along with other opposition parties, used to taunt the BJP about its electoral promises. The BJP’s repeated inclusion of removal of Article 370 and construction of Ram temple at Ayodhya in the manifesto were favourite taunts.

These parties often used to ask the BJP in mocking tones as to why these things find mention in manifesto. The insinuation being that the BJP was not serious about fulfilling these promises and referred to them for their emotive value.

Unfortunately for them, the BJP has come good during the past one year or so on both–the construction of Ram temple and removal of Article 370. The impediments in the way of construction of temple got removed after the Supreme Court verdict of November 9, 2019.

On August 5, 2019, Union Home Minister Amit Shah moved a Bill in the Rajya Sabha that sounded the death knell of Article 35 A and restating Article 370. Technically, 370 remains in the Indian Constitution but it is in permanent coma. So far, so good.

What about the fulfillment of other promises the party heading the National Democratic Alliance (NDA) had made in its manifesto? Well, it seems the party is inching closer to implementation of its agenda as it won eight more seats in the biennial Rajya Sabha elections in Uttar Pradesh and one in Uttarakhand.

With this, the BJP now has 92 members in the Upper House and the NDA collectively has 112 MPs there. At least 12 members are nominated by the President and it is expected that in the winter session of Parliament, the NDA may have the support of as many as 150 MPs. This is very close to two-thirds majority figure of 164 (total strength of RS is 245) and three seats are presently vacant.

It needs to be mentioned here that the impact of Shiromani Akali Dal (SAD) and Shiv Sena leaving the NDA has been minimal, only six MPs in the Rajya Sabha. The support of AIADMK, Biju Janata Dal, YSR (Congress) and TRS is something that the party can count upon.

What next is a question seriously being debated in both the NDA and the opposition circles. What next in terms of legislation/s that will help BJP further its promise as indicated in the manifesto?

First and foremost law that draws the attention of all is the Uniform Civil Code (UCC) enunciated by the party. In fact, speculation about the UCC had started in right earnest when a new law was passed banning instant triple talaq. Now UCC shouldn’t be too far since it has enough support in both house of the Parliament.

As the example in France has shown, a parallel society within a country isn’t good for common citizens. Land of the law should apply to everyone—and not trampled upon by those who follow their own religious tenets. Or the consequences could be fatal for a nation.

In its manifesto, Citizenship Amendment Bill, zero tolerance to terrorism, reinforcing border security, combating infiltration, strengthening national security and doubling farmers’ incomes had also found mention. The BJP has already fulfilled its promise on CAA though impediments in form of protests and violence by anti-CAA protestors have only paused due to the Coronavirus pandemic.

Regarding zero tolerance towards terrorism, the party had set a new paradigm when it ordered Balakot air strikes in Pakistan after last year’s Pulwama terrorist attack. It bears mention here that a Pak Minister had owned up Pulwama attack as the handiwork of Imran Khan’s government.

Incidentally, the BJP had much smaller numbers in the Rajya Sabha when Narendra Modi won his first term in office. This used to create problems for the BJP in getting various legislations passed there. However, between May 2014 and November 2020, the party has gained close to 50 seats in the Rajya Sabha (47 to be exact). The strength of the Congress has gone down to 38 now, its lowest tally for decades.

For the past few months, opposition parties have accused the BJP of doing nothing else but push its agenda. That is amusing as gone are the days of mocking it for its failure to implement its agenda! The wheel truly seems to have come full circle.