Yechury calls Hindus violent and we must all thank him 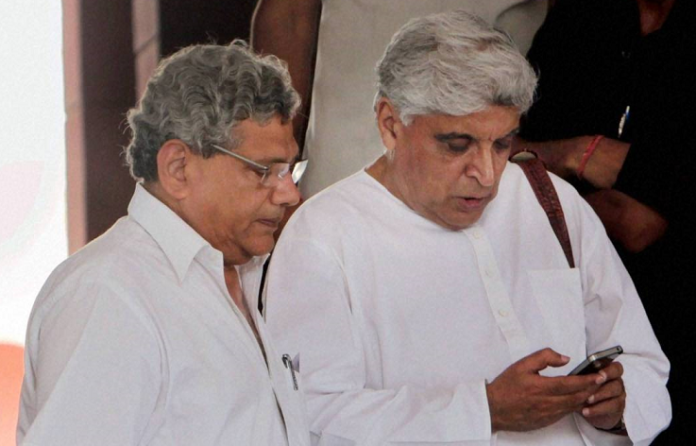 All Hindus, millions abroad and many times over in India, must stand up and applaud Communist leader Sitaram Yechury for stating that their epics Ramayana and Mahabharata are ample proof that Hindus have been violent in the past.

Angry? Don’t be for Yechury has hacked the very tree of his vicious ideology which swears by atheism, negates religion and treats Hindus reverence of their past as nothing better than mythology.  So the logical and rational Communists are now treating Hindu’s past as real. Isn’t it a matter of celebration?

Of course a snake doesn’t let go an opportunity to inject his venom. Yechury calls out Hindus for being violent in a bid to justify the “Saffron terror” narrative which the Congress-Communist combine have worked so hard to build since independence and which now is returning in waves to create a watery grave for the peddlers.

An average Hindu is gullible to propaganda. The vicious do it as a strategy so Hindus suffer from guilt, fail to unite and thus lack pride. Hindus without identity are easier to crush. The trophy of controlling or breaking India then goes to peddlers. That’s why I try to puncture this narrative as often as I can so these peddlers are nailed.  If Hindus regain their pride, these peddlers would run out of lies.  Then the Big Game is over—happily for India and its majority.

In last 48 hours, two such attempts have been made—one by Sitaram Yechury and the other by Bollywood writer Javed Akhtar. Most of my Hindu friends have found themselves tongue-tied in countering them. Yechury and Akhtar have mocked Hindus who, because of their gullibility, feel helpless. I give you the words my brethren Hindus to stuff their filth back into their throats.

Yechury says that Ramayana and Mahabharata prove that Hindus have been violent. That it’s RSS which has tried to militarize Hindus in an ideology which is similar to fascist Mussolini (I also include similar analogy Yechury has drawn in the past between RSS-Hitler). Javed Akhtar, in response to Sri Lanka ban on veils following massive Easter Sunday suicide-bombings, mockingly tweeted that don’t leave out “ghoonghat” (head-cover of Hindus) too.

I propose below how an astute Hindu must reply to the likes of Yechury and Javed Akhtar not only to counter but also to regain their own convictions. That’s how you should shape your reply:

Mr Yechury, you say Hindus have been violent in the past. But is being violent the same as spreading “saffron terror”? You could be violent in wars, which is a matter of dharma (righteousness), but killing innocent people in suicide bomb attacks is terror. Please name any Hindu suicide-bomber from our entire history, failing which stuff your mouth.

You claim that RSS follows the Fascism/Nazism ideology. But RSS has never given a call for genocide. Fascist Mussolini left League of Nations; RSS supported it. If RSS were adherents of Nazism and Hitler, did they give a call that Muslims must not hold public office; or inter-marriages must not happen, or that “Pogroms of Muslims” was the answer? Did they ask for Muslim professors to be removed from universities after the Partition?

Further, Mr Yechury what would you say of your “God” Karl Marx who echoed Hitler’s ideology describing Jews as “arch-exploiters”? Or John F. Kennedy who praised Fascism-for-Italy and Nazism-for-Germany in the 1930s? Or our own Pandit Nehru who swore by socialism even as millions were being massacred by your ideologue grandparent (Stalin) in Russia? And if RSS is fascists/nazis, how would you describe the Quran and Sharia?

Subhas Chandra Bose was hailed in India even though he had joined hands with Japan, an ally of fascist-nazist forces. Do you condemn millions of Hindus for supporting Subhas Bose? I dare you Mr Yechury to give us your opinion on Subhas Bose.

And lastly on Javed Akhtar. A burqa can be a security threat—not a “ghoonghat”. So please don’t draw a false, mocking analogy. I can cite you dozens of example where burqas were used to enact terrorist acts. Why go far, let me give you a Bollywood analogy itself, easier for you to recall. Did you see “Dil Se”? How do you think Manisha Koirala tried to blow up the Republic Day parade?

And please do let us know when you’ve found a “terror” act being carried out under the guise of a “ghoonghat.” The fact is you can’t. So where do you think Hindus should shove your comments back in you?

Both Yechury and Akhtar lose no opportunity to insult Hindus. It’s for the Hindus to stand up to such inimical forces. The crux for Hindus is: Know your history and facts. Regain your pride. It would do good to you and the future of your children and grandchildren.