Yet another India-Japan naval exercise; the intent won’t be lost on China 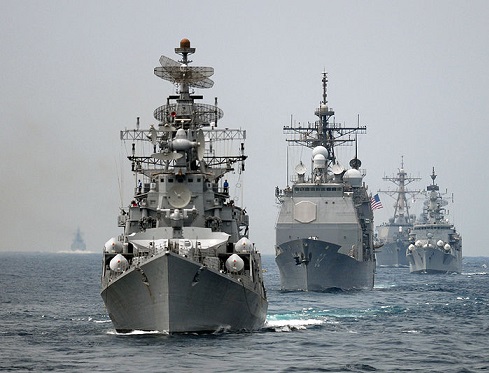 If nothing, the three-day India-Japan bilateral maritime exercise, held this year in the north Arabian Sea, confirms the deepening military ties between the two country.

The biennial exercise, which began in 2012, showcased some of the best weapon the two countries possess. Japan fielded JS Kaga, one of its two Izumo class helicopters carriers and a guided missile destroyer. India showcased a stealth destroyer, a stealth frigate and a fleet tanker, along with helicopters, jets. Both also shared their own maritime patrol air assets.

It is fitting to remember that the two navies had participated in a week-long passage exercise around the Malacca Straits in June.

Earlier this month, on September 9, India and Japan had concluded a military-logistics agreement.

Japan, since 2015, is a permanent participant in the high-end US-India Malabar naval exercise which reflects the growing three-way defense cooperation among the three countries. India and US had also held a passage exercise in July.

If earlier India’s varied military exercises, which included China, looked without any specific aim, the exercises lately show an intent and are directed at China which has raised the bogey of war in India’s eastern Ladakh along the Line of Actual Control (LAC).

It was in 2007 when the then Japanese prime minister Abe Shinzo had announced his vision of a “Confluence of the Two Seas”—the Indian and the Pacific Ocean—to the Indian parliament.

In September 2014, after becoming the prime minister of India, Narendra Modi visited Japan and remarked about the “expansionist” attitude of certain countries, an unambiguous pointed reference to China.

Japan now has a new prime minister in Suga Yoshihide who was primarily focussed on domestic affairs as chief cabinet secretary to Abe. He has also hinted he would adopt a “hands-off” approach to foreign policy. Yet, he reached out to Modi soon after assuming office, a move that exhibited a desire for same intensity in relations.

It’s been 12 years since India and Japan had agreed in 2008 about a “mutual stake in each other’s progress and prosperity.” The attitude hasn’t sagged in last dozen years. Last year, Japan and India had also begun a 2+2 dialogue of foreign and defense ministers.

A few laggards remain though. India has sought from Japan to acquire ShinMaywa US-2 amphibious aircraft for nine years now but the deal remains incomplete. Japan has also withdrawn from the Indian Navy’s Project 751 by which six new conventional submarines with advanced propulsion specifications would be made ready in India. In 2016, media reports had suggested that India and Japan might also install submarine-tracking “hydrophones” in the Indian Ocean. No progress has so far been reported in public space.