Yeti Narsinghanand Saraswati: ‘I promise I can’t be beheaded’ 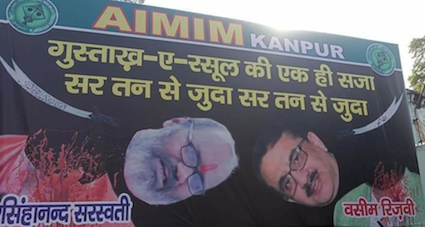 I watched Jaipur Dialogues last night. Yeti Narsinghanand Saraswati was in conversation with Sanjay Dixit, a bureaucrat, extremely popular on social media. The head priest of Dasna temple in Ghaziabad, I worried for his life. Why go that road which only ends with your severed head on the floor?

Most like me won’t say what he said about Prophet Muhammad. It’s just not fear. It’s intrinsically Hindu to let others do what they want. Religion is so integral to human life. More so to Muslims who even don’t depict the face of their Prophet. Why prod a fraught nerve?

It was soon evident the high priest’s words in Press Club of India in the Capital were no aberration. He has said the same many a times before and is incessantly repeating it every minute. He doesn’t mind trading his life in return as long as India wakes up to the Islamic threat.

I soon come to know that Swamiji Maharaj was once an engineer who worked in the European Capitals for nine years. He returned home and dabbled in politics. He joined Samajwadi Party and since Muslims abound in this party of Yadavs, he befriended many.

He claims an incident changed his life. A Hindu girl had turned prostitute after a Muslim man lured him with emotions and she soon was a delicacy passed on to his fellow Muslims and politicians. She drew his attention, Saraswati Maharaj was indifferent and the next thing he learnt was that the girl had committed suicide. “I haven’t been able to sleep since that day. Every night that girl, like my daughter, comes to me in nightmares. Every single day. It has left me with a wounded soul.”

The Western-educated youth now turned to finding out what Islam really is. Since he knew a great many Muslims, he found an entry in Madrasas and Mosques. He spent time inside, soaking in the air which he says is turned toxic by the men on the podium.

“These Ulemas and Maulvis speak words which could make you go insane. They revel that their ancestors had put Hindu girls in Mandis (auction) in the past. That everything which Hindus own—their property, their women—belong to them (as they are kafirs).

“The words these men speak in Madrasas and Mosques, you can’t take it. Your body would be on fire. Bhagwan Ram is said to be servant of the Prophet. Their public utterances is completely different to the poison they spew in private.”

It paved the way for the Saraswati Maharaj we see today. He remembers how Kamlesh Tewari was beheaded for commenting on the Prophet. Nothing could save him: Neither India’s Constitution which allows Freedom of Speech as its intrinsic value, nor the Left-Liberal-Secular eco-system which talks of human life above anything else nor the so-called protagonists of Hinduism. “Ho many Sants do you remember decried Kamlesh Tewari’s killing?,” asks our man, “When Tewari’s mother hugged me and cried, and soiled my shirt with her tears, I carry that burden on my soul.”

Now Swamiji doesn’t care. He thinks it’s important that Hindus read Sharia. He feels it’s important even Muslims read the book and see the contempt it has for Kafirs. (Sanjay Dixit makes an interesting point: “I am asked if I respect Islam—I reply, does Islam respect me?). He feels Hindu girls are made aware of the lurking danger.

Swamiji talks about Kaali Ma and the idol there is in Dasna temple. “She has the severed head of the devil and has eight arms with different weapons. “Ashtha-bhuji Kaali.” He doesn’t mind losing life as long as the society, and the world, is made aware of what he believes is the unapologetic ideology of Islam.

“But I won’t be beheaded. I can promise you this. I have been a sportsman and I have only grown stronger. If they come, I would take them on. They could eliminate me with bomb or guns but beheading, I won’t go that way.”

Hearing this conversation, my personal takeaways were a few. One, as Salman Rushdie says, I don’t approve of words which hurt a person’s religious core but I would go to the end of the word to defend that man’s right to say it. If the repercussion is with his blood on the street, I would oppose it with all my might.

Two, these issues are dealt with by law and order agencies. They take a call on punishment, not individuals or lakhs of Muslims who are asking for severance of his head in Bareilly, or capital punishment in Kanpur, or several stakes offered for the beheading of the Swamiji.

Three, this makes a mockery of India’s governance, its’ laws, its constitution. It’s not a jungle law but a structured society.

Fourth, if this could happen in India, where majority are Hindus, imagine the latter’s plight in countries such as Afghanistan, Pakistan or Bangladesh. If a Hindu is subject to mob-justice in India, what would be his fate in Kabul, Karachi or Khulna?