Yogendra Yadav hits a new low with his lies 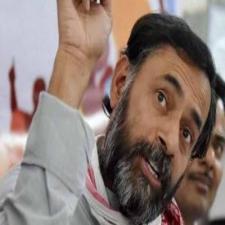 Yogendra Yadav has the cultivated voice of an actor who is dressed up in a kurta-pyjama, made distinctive by his non-use of politicians’ whites. He was part of the troika with Prashant Bhushan and Arvind Kejriwal before the once-mufflerman got rid of them. He has since formed Swaraj India, so anonymous it could challenge an IAS-aspirant in its quiz test.  News networks such as NDTV and India Today are the ones who keep him going. But for some elections, somewhere in India, at any time of the year, Yadav would go unnoticed on a busy street.

I do find him sometimes on The Wire and the Firstpost, slightly amused when he sings paeans in praise of Jignesh Mewani; and definitely irked when he distorts history to run down Rashtriya Swayamsevak Sangh (RSS) as he did in his edit-piece in the Hindu on Wednesday.

Yadav must be reading from the dubious books of Romila Thapar and Irfan Habib to suggest that since its inception in 1925, RSS has never been part of a national movement. Which national movement sir, the one where we didn’t seek complete independence from British but only sought dominion status? (truth to tell, India was still a dominion to British empire on August 15, 1947).

If Yadav remembers the year of RSS formation, he also ought to have told his readers that it came in the backdrop of Khilafat movement (1921-24) where Muslim leadership was appeased to the extent that Moplah rebellion occurred which butchered thousands of Hindus.

The slaughters were so macabre that this is what Madras High Court noted after the event: “…(these) murderous attack indicate something more than mere fanaticism…the only survivors were those who either got away or were left as dead.”

Yadav then does the cheap act of lampooning Veer Savarkar for seeking mercy from the British in the Cellular Jail of Andaman and Nicobar Islands and thereafter meekly follow the conditions imposed on him. Doesn’t Yadav know that only the most dangerous prisoners were kept in that “kaala paani” jail? That Savarkar, unlike Nehru who was given a bungalow with his choicest curtains and a garden in his jail-term, was a prisoner marked D (dangerous) and went through most unspeakable cruelties: flogged, manacled, made to eat gruel which was riddled with worms?

As for his mercy petitions, it is known to everyone but the fake history peddlers that Savarkar’s clemency pleas were a tactical ploy like Shivaji’s letter to Aurangzeb during his arrest in Agra as he didn’t want his life’s mission to end behind bars.

Yadav would like us to believe that Savarkar went quiet and obeyed British after he was released. In fact Savarkar spent 27 years in jail and under prison-restricts terms between 1910-1937. He helped found the Ratnagiri Hindu Sabha and worked ceaselessly against caste discrimination and untouchability in the years which Yadav terms as “quiet.”

Yadav has a problem with Savarkar and his Hidutva philosophy but wouldn’t tell readers that one of India’s tallest freedom fighter was a self-avowed atheist! He would not mention how Savarkar was wrongly implicated in Mahatma Gandhi’s murder.

Yadav then tars Shyama Prasad Mookerjee for “collaborating” with Britsh during 1942 Quit India stir which he terms as the “biggest anti-colonial uprising.” A view has lately gained ground that “Quit India” was as phoney as “non-cooperation” and “civil disobedience” movement, meant only to vent out the frustration of Indians. Quit India stir was a desperate attempt of Congress which had committed the grave error of resigning from its’ provincial governments in 1939.  Without a say in national politics, and with Muhammad Ali Jinnah and British in alliance, Congress whipped up Quit India just to stay relevant. As soon as it was launched, all of its leaders were put behind bars. Jinnah got a free field to pursue—and finally accomplish—his dream of a Pakistan.

As for RSS playing no role in 1942 Quit India movement, let Aruna Asaf Ali’s words debunk Yadav’s claim. Aruna Asaf Ali had revealed that RSS Delhi sangachalak Lala Hansraj Gupta had given her shelter in his own house during the 1942 Quit India. Prominent Congressmen like Achutrao Patwardhan, despite being a strong critic of RSS, and others were kept safe in swayamsewaks’ homes.  Be it food, safety or in illness, RSS stood like a wall in safeguarding Congress leaders.

Yadav has no qualms in besmirching the reputation of Mookerjee who saved Hindus by championing the cause of Bengal partition after the Muslim League government of Bengal butchered and raped thousands of Hindus in the Great Calcutta Killings of 1946. Mookerjee was the man who set up 5000 relief kitchens during the 1943 Great Bengal Famine of 1943.

Yadav then trains his guns on Nathuram Godse-RSS connection. He would never tell the readers that Godse left RSS because it considered the latter to be a “coward.” As per the Justice Jeevanlal Kapur-headed 1969 Government-appointed Commission report, not only RSS was not involved in Gandhi’s murder but “in Delhi also there is no evidence that RSS as such was indulging in violent activities as against Mahatma Gandhi or top Congress leaders.”

And this man has the gall to call RSS an anti-national. What do you think we should call you Mr Yadav?