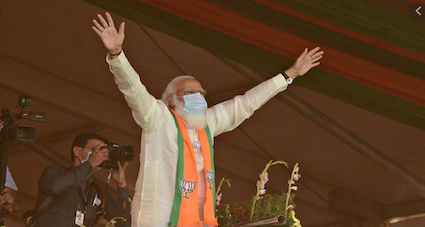 Prime Minister Narendra Modi took on Trinamool supremo and Bengal CM Mamata Banerjee’s ‘Khela Hobe’ (Game On) with a slogan of his own: “Vikas Hobe.” He was addressing a mammoth rally at Purulia on Thursday.

Slamming Banerjee by saying that people will punish TMC for 10 years of misrule, PM said, “Didi, O Didi – you played for 10 years. Now the game will end and development will begin”.

Modi launched a blistering attack on Mamata Banerjee and accused the ruling Trinamool Congress government of killing the aspirations of the middle-class, over issues like corruption and lack of development, while switching between Hindi to Bengali often to address the crowd. He also accused her of encouraging Maoists.

PM Modi blamed the Bengal government of betraying the tribals and the poor by depriving them of central benefits.  He said while we believe in Direct Benefit Transfer (DBT), TMC believes in “Transfer My Commission”.

“The cut money, Tolabaji (commission), has hurt the poor and the Adivasis the most,” he told the gathering in the tribal-dominated region. The PM explicitly targeted Banerjee and accused her of not acting spontaneously when the Amphan Cyclone came. “Money for houses, TMC Tolabaj took a cut. We sent cheap rice to the poor. TMC tolabaj did not spare that. We gave free rice during the lockdown, Didi’s tolabaj scammed it. When Cyclone Amphan came, same problem, there was no relief from the TMC cut money. Our santhal (tribal) brothers of this region…farmers have been seeking help. But Didi has left them to their own devices.”

He said it is the biggest irony that the land that witnessed the Lord Ram and Goddess and Sita’s exile, fulfilled the thirst of Goddess Sita, has now given Purulia a life riddled with water crisis.

“First the Left government and then the TMC government didn’t let industries develop here. The kind of work that should’ve been done for irrigation, didn’t take place. I know the problems faced in rearing livestock due to less water. TMC govt was busy in its ‘khel’ by leaving farming on its own,” the PM remarked.

During the rally, he also talked about Mamata Banerjee’s injury and her allegations of “conspiracy” for the first time. He said he was concerned about her injury and pray for her quick recovery

“Didi is taking out her frustration on me. But for us, she’s a daughter like crores of daughters of India. Respect for them is part of our culture. That is why we were concerned when didi got injured. I pray to God that her leg injury heals soon,” he said.

The prime minister addressed the rally a day after Banerjee released her party’s election manifesto. People in the Purulia assembly seat, part of the Purulia Lok Sabha constituency, will vote in the first phase of polls on March 27. The eight-phase assembly elections in the state are scheduled to begin on March 27 and end on April 29.